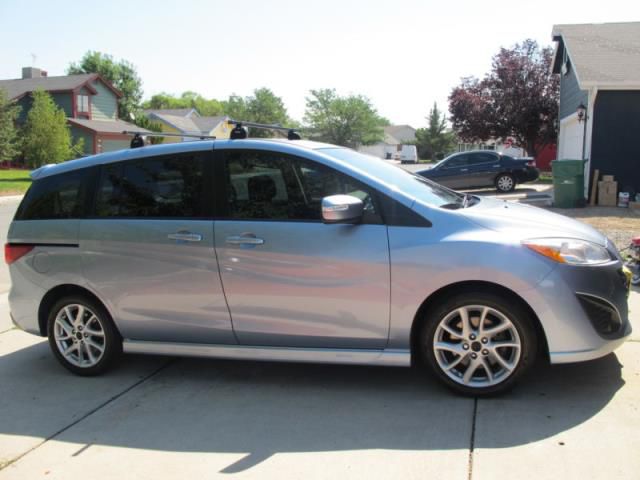 For more details eMail me : ennisperezq2o@hotmail.com

I have a 2013 Mazda 5 gt i am selling i got a bigger car and do not drive this...The car in in MINT condition always garaged and well maintained.kbb is $15,500 best but does NOT include all the extras this car has this car was special ordered with everything kbb does not have options for most of it.This vehicle some specsCurb weight: 3,457 lbsHorsepower: 157 hpEngine: 2.5 L 4-cylinderMPG: 22 city / 28 highwayWheel size: 17? diameter, 6.5? widthDimensions: 181? L x 69? W x 64? HTorque: 163 lb-ft Some highlights Auto headlights Auto windshield wiper Backup sensors Heated seats Rear heat/AC Premium sound Hid headlights Fog lights Adjustable headlights choose depending on weather Roof rack Sun roof Tow package Tinted windows DVD players Painted calipers Painted emblems AND MORE!!! Those are just some of the major ones Vehicle info:I have all service records for this vehicleDetailed every week (per me) (Have detailing buissness)No scratches,door dings,chips except from rocks in front no major ones NEVER been off road tires still under warentyAnd more Extras: NOT listed with KBBComes with 4 keys not 2 almost $1500 Adjustable headlights from insideroof rackhook for sub and ampcustom leather seats painted calapersparking sensors tinted windowsheaded seats moon roof2x DVD players with hook up@ bluetooth mounted in seats custom painted letters and emblems tow package this car has been great no issues ever just got a bigger car to small for me been well taken care of and will not finding with the milage and that has been as cared for as this car