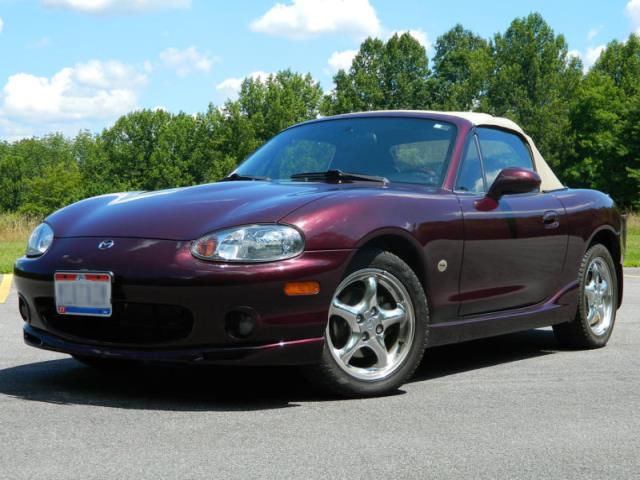 FEEL FREE TO EMAIL WITH ANY QUESTIONS : ar0nuwilburnryan@yahoo.com

Rare 2000 Mazda MX-5 Miata SE - This was my dream car for many a year until I had saved up my pennies and found this gem for sale 8 years ago. I am the third owner (each of us owning her as a toy, not a daily driver) and have documentation for every screw ever turned! The 2000 Mazda Miata represented the 10th anniversary for this beloved vehicle. A total of 3000 Special Editions were produced in 2000 (this vehicle is number 1268 of 3000). This Special Edition came equipped with the high output 1.8L 140hp 4 Cylinder mated to a 6-Speed manual transmission. The vehicle's interior is decked out with tan leather, Bose sound system with AM/FM/Cassette/CD, wood steering wheel, gear shifter knob and break handle. The exterior includes a rear spoiler, aggressive body molding, 16" chrome wheels and unique SE badging.

Visiting an auto museum is one of the best ways we know to connect with car culture and to commune with the past and bone up on one's knowledge. Most of us have a decent museum within a few hours drive of where we live, but that doesn't mean it's easy to see the world's great collections - factors like cost, time and mobility can get in the way. Videos are great, but they don't allow us to browse at our own pace or choose what we'd like to focus on. The folks behind Google Maps have a solution - the virtual museum tour, as seen here at Mazda's fantastic museum in Hiroshima, Japan.
The Google Maps tour allows viewers to take a walk through the main exhibition area of the museum, and you can focus on specific classic cars from Mazda, or check out displays featuring new technologies like Skyactiv. To take a quick spin through the museum - or a leisurely stroll at your own pace - scroll down to start your own virtual tour.