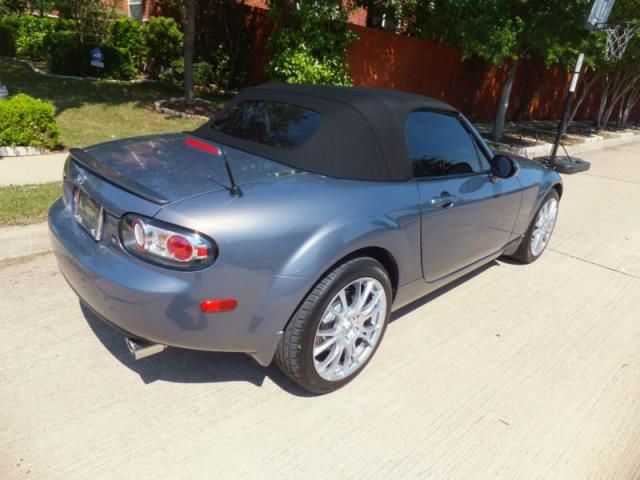 Selling my 2006 MX-5 Miata since I need to free up some garage space. I have owned this car for over 3 years. It is in near mint condition, exterior is flawless with some minor stone chips on the front bumper. Interior is in like new condition with new floor mats, JVC Nav system that has bluetooth, it will synch with your smart phone for hands free operation, and also streaming music. Brand new leather seats was professionally installed 2 months ago, steering wheel has been refurbished by a professional shop here in Dallas to OEM condition, with new leather. Installed a brand new Robbins Canvas top 1 month ago at a professional install shop. Car drives like new, All fluids have been replaced on a regular basis. Mobile 1 Synthetic oil, KN Oil Filter. Brand new Tokico blue shocks on all 4 wheels, with new Eibach springs and sway bars, also new end links. New front wheel bearings from Timco. Brand new cross drilled brake disks and pads on all 4 wheels, flushed brake system with new fluid.Also Brand new Stainless Steel rear exhaust system. New Enkei 18 Inch rims with Hankook Tires. Brand new coolant expansion tank, new sparkplugs and airfilter plus a magnetic oil plug.