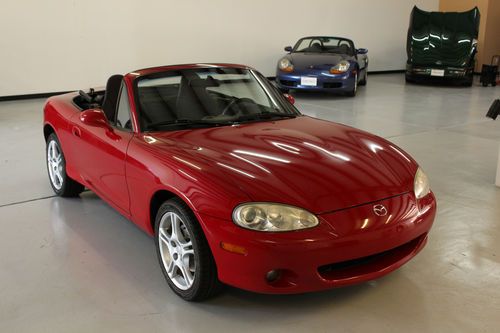 Condition: UsedA vehicle is considered used if it has been registered and issued a title. Used vehicles have had at least one previous owner. The condition of the exterior, interior and engine can vary depending on the vehicle's history. See the seller's listing for full details and description of any imperfections.Seller Notes:"Clean CARFAX!!! normal wear and tear for age and miles, 5spd, top is in great condition, 4 new tires, car is clean and runs great."

When Mazda unveiled the Hazumi Concept at the 2014 Geneva Motor Show, our excitement for the next Mazda2 increased considerably. The Hazumi looks to retain much of the driving character that makes the current 2 one of the very best cars in its segment while infusing it with more aggressive styling. Of course, when the 2 arrives, it won't look exactly like the Hazumi. That's why these spy photos are so important.
This is our very first look at the next-generation 2, and although the Hazumi influence might be difficult to discern, thanks to the swirly camo, it's still there. The grille shape and the headlights are very similar in shape to the items shown on the concept, while the camouflage disguises the shape of the greenhouse, which looks somewhat like the Hazumi.
What we can't see, though, is under the hood. That's where our spies come in, reporting that a pair of 1.5-liter SkyActiv engines will see action in the tossable 2. The former, which we'll almost certainly see in the US, is a gas-powered mill found in the Euro-spec Mazda3. In the larger 3, it produces 99 horsepower and 111 pound-feet of torque, which is broadly similar to what the current 2's 1.5-liter pumps out. The other engine, a 1.5-liter SkyActiv diesel, probably won't be making the trip, although we'll continue to hope.