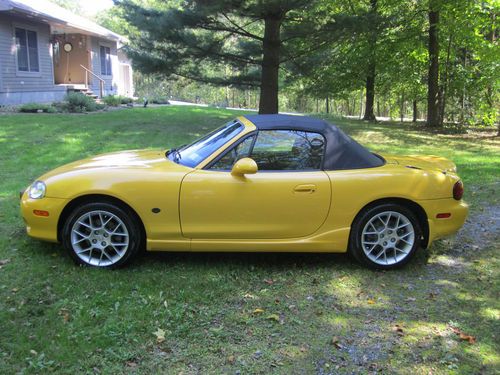 Condition: UsedA vehicle is considered used if it has been registered and issued a title. Used vehicles have had at least one previous owner. The condition of the exterior, interior and engine can vary depending on the vehicle's history. See the seller's listing for full details and description of any imperfections.Seller Notes:"Extremely low miles. Garage stored under cover. Never out in rain, snow or lingering salt. Near showroom condition."

I am the original and so far the only owner of this 2002 Blazing Yellow Mica Special Edition Miata.  In the year that these were made this car was one of only 1000 produced.  The other special edition color that year was Titanium Gray of which there were 1500 produced.  So first of all this car was rare to start with.  I purchased it and drove it off the dealer's showroom floor for it's first trip (other than being put in there in the first place).  Since that day it has been protected by a garage throughout the year and a garage and a car cover through the off season.  It has only seen the rain fall once. That was the weatherman's fault, not mine.  It has never gone out in the spring before the salt is all off the road, and I put it up for the year way before the salt hits the road.  My intention when I purchased this car was to treat with the utmost love and care and have it later in my life as a collector car that I could take to car shows with me.  My health and therefore, my financial situation calls for me to rethink some of my priorities.  This gives some lucky person out there a chance to own a fantastic car that you can't just find out there every day.  Believe me, I look frequently just for fun.  (And I keep looking for a 2000 Evolution Orange Special Edition - also rare)

That being said, it is not what you might think is a great deal considering the cost.  But from the research I keep trying to do I think my pricing is fair.  And if you don't, obviously you won't be buying it yet.  I am including in the purchase the original window sticker that was on the car when it was new.  Also the extra set of keys.  The vehicle is equipped with an engine immobilizer if someone tries to take it without the keys.  It also has a perimeter shock sensor alarm.  I received a gift from Mazda after my purchase which was a leather duffel bag with "feet".  I have never used that and it still is in the original box it was shipped in.  See, I was really in this for the long haul as a collector's item.  I currently have the vehicle insured with Haggerty Insurance Co. for a replacement value of $20000.  I got that value with just a few pictures of the car.

I didn't really know what all to take for pictures so if you would like to see something specific just let me know.  Also, any questions let me know.  I have had the vehicle serviced at the dealership where I bought it since 2002.  The guys there enjoy seeing it come back every year looking like it did when it left.  The last of the pictures of the car shows the only damage that is on it.  The very first month I owned it I pulled a little to far into my garage and hit a planter.  I put touch up paint on the spots I made on the bumper.

As far as picking up the car or having it delivered to you, I have the flexibility to help you work on that if you need help. So, thanks for looking and feel free to contact me.