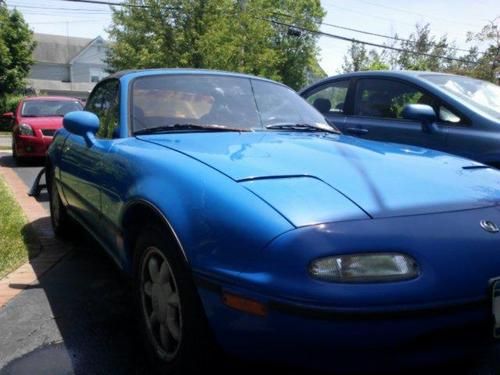 Condition: UsedA vehicle is considered used if it has been registered and issued a title. Used vehicles have had at least one previous owner. The condition of the exterior, interior and engine can vary depending on the vehicle's history. See the seller's listing for full details and description of any imperfections.Seller Notes:"Battery dead, driver side manual window non-functional, speedometer non functioning, loose gear shifter, rust on the window wipers and lower quarter panels, airbag needs servicing, multiple tiny dings and chips, rims have brake rust, convertible top has multiple small tears and wear, convertible window is yellowed and the trunk traps moisture."
This auction is for one, as is, used
Classic
1993 Mazda Miata
Base Convertible 2-Door 1.6L
Last driven in Feb 2013. Currently non-functioning
(Would have repaired and kept but I inherited a new vehicle and have decided not to keep this one.)

As the 2nd owner, I bought this car in 1996, and for the past 17 years I have enjoyed ownership with the occasional repairs to the brakes( every 3-4 years), radiator( twice), gas tank( original rotted out ), front end tire arms and ball joints, timing belt and water pump( 3 times), battery  ( twice). The engine and transmission are original.and working well.
IN NEED OF MINOR RESTORATION
Currently the battery is dead, driver side manual window is non-functional, speedometer is non functioning, it has loose gear shifter, there is rust on the window wipers and lower quarter panels, the airbag needs servicing, there are multiple tiny dings and chips, the rims have brake rust and chips, convertible top has multiple small tears and wear, convertible window is yellowed and the trunk traps moisture.
Other than these issues, the car works well.
Title has a lien listed from the original owner but has been satisfied for the last 17 years(I  have the original letter clearing the title)

Pickup only.
DO NOT ASK FOR ME TO REPAIR AND DELIVER VEHICLE.
Paypal or a verified Bank Check are the only accepted forms of payment.