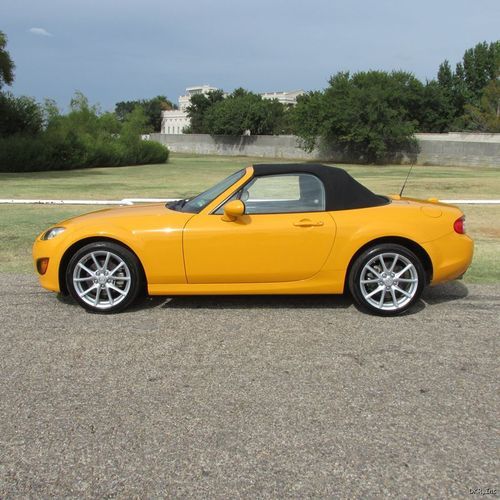 Some cars have low mileage, and others have close to no miles at all. This 1990 Mazda Miata, currently listed on eBay Motors and located in Kingman, Arizona, falls into the latter category with only 27 miles on the odometer, according to the seller. But we have to wonder: how did one of the best-driving, most influential sports cars of the past two decades sit without being driven for 24 years? Consider it the seller's loss on this one.
The seller says he bought the car with 20 miles on it, and explains 6.9 miles were added when the car was towed home on a car dolly. It was never registered. Furthermore, the seller says the car didn't come with a set of keys, so he had to have a set made. Though the paint is clean and shiny, the Miata didn't escape minor cosmetic damage over the years, with scratches on the hood, the trunk and the factory hardtop that is included with the car. The front, right fender has a small dent as well, which can be seen in a picture. The seller says the car was stored in a building with windows, so the paint is faded a bit in some places. It's missing its antenna and the battery, and the only non-original parts on the car are the windshield wipers. The clear-title car comes with all paperwork, according to the seller, but, besides the owners manual, he didn't specify what other documentation would be included.
With bidding currently at $10,300 and the reserve not met, this Miata definitely isn't the deal of the century, and we have to question where the value is in this one. The way we see it, it's hard to justify the money if it can't be driven as-is (come on, no battery?), has questionable history, isn't rare and sat in storage for its whole existence. The "weather cracked" tires are probably just the first rubber parts on the car that need to be replaced before it can be driven, but at least the spark plugs were removed and the cylinders were filled with Marvel Mystery Oil prior to storage, which helps to prevent rust and corrosion from forming in the engine.