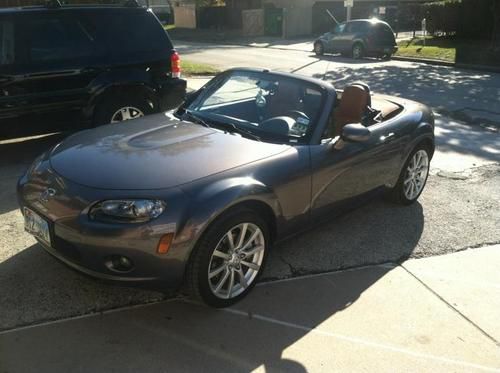 Like new 2006 Grand Touring Edition. Full leather, smoke free environment. Satellite ready. CD-Player. Six-gear manual transmission. This is a great little car. aScratch on the front left fender and one on the front bumper, but otherwise, pristine condition, new tires, no rust. Awesome gas mileage. ONLY 43,000 miles. IF YOU DRIVE IT, you will LOVE it. MUST SEE.

Purchased the vehicle from a dealer in 2010. No mechanical issues whatsoever.

Selling because of move to the United Kingdom.

Cold weather might be starting to grip parts of Canada, but our neighbors to the north are going to be able to drive their 2015 Mazda cars and utilities from Vancouver to Montreal with a little more peace of mind. That's because Mazda Canada is instituting an unlimited mileage warranty for its new models.
The updated plan starts with all 2015 model year vehicles (even those already sold), and the scheme simply removes that distance limit on everything but the emissions defect coverage. That means that the Mazdas have one year of service adjustments, three years of new vehicle coverage, five years on the powertrain, seven years against corrosion and three years of roadside assistance for as many kilometers as the owner drives.
The change removes at least one, tiny piece of anxiety about buying a new vehicle because it's easy to know when the coverage ends. "By offering our customers an Unlimited Mileage Warranty, we believe it will enhance their ownership experience by alleviating concerns such as kilometre limitations, repair costs and resale value," Kory Koreeda, president of Mazda Canada, in the automaker's announcement.