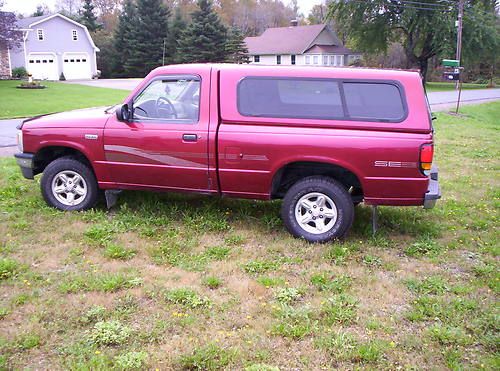 Condition: UsedA vehicle is considered used if it has been registered and issued a title. Used vehicles have had at least one previous owner. The condition of the exterior, interior and engine can vary depending on the vehicle's history. See the seller's listing for full details and description of any imperfections.Seller Notes:"vehicle has a state inspection, new tires,new shocks, new brakes & some brake lines as needed.4 studded snow tires go with it, good shape- no panel rust. Frame is good, has a bed cap painted to match with a bed liner & spare tire in excellent shape. has AC.Installed front spring hangers on rear.New rear tailgate.vehcl is in great shape.I wouldn't hesitate to go anywhere with this truck.I bought this for my father & fixed it up for him, he has since passed.This isn't junk..This vehicle would be great for a college student or anyone really.well maintained & looked after.The front bumper has some rust on it.obviously not bad enough to fail an inspection."

vehicle has state inspection, new brakes ,new tires ,  shocks, some brake lines as needed. 4 studded snow tires go with it great shape - no body rust. has a bed cap painted to match with a bed liner. has an excellent spare tire, new tailgate new rear spring - front hangers. I wouldn't hesitate to go anywhere with this truck, I bought it for my father and fixed it up for him, he has since passed. This isn't junk.. this truck would be great for a college student, or anyone really. This vehicle has been well maintained. The front bumper has got some rust. I noticed the hood has a slight crease in it, not sure how that got there. I can send a picture if needed.