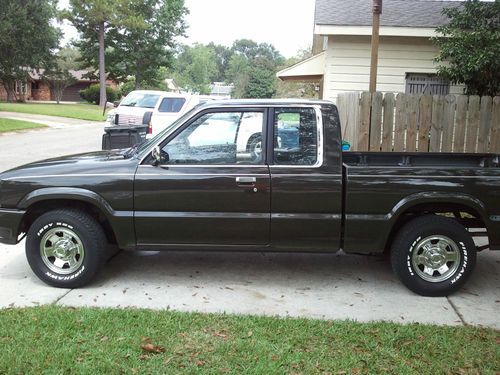 Condition: UsedA vehicle is considered used if it has been registered and issued a title. Used vehicles have had at least one previous owner. The condition of the exterior, interior and engine can vary depending on the vehicle's history. See the seller's listing for full details and description of any imperfections.Seller Notes:"good condition with a few small imperfections."

I have a very nice1987 Mazda b2200 king cab! rare little truck especially in this condition. this little truck has a rebuilt motor that runs great! I would get in this truck and drive it anywhere with no worries! Ac blows cold, pioneer cd player, new headliner, good 5 speed trans with good clutch, new glossy paint, new chrome, tires like new! all glass is good with no cracks or chips. this would make an awesome truck to customize or drive anywhere like it is. shipping is available at buyers expense.

Every story dealing with a new rotary engine from Mazda lands in a different place on the matrix of possibilities between "Coming soon!" and "Never gonna happen!" In 2011 it was speculated that the rotary engineering program would be shut down with the demise of the RX-8, in 2012 the program was still alive and taking lessons from the SkyActiv engines, in August 2013 a Mazda insider said a rotary engine called 16X would be here in two years, in November the CEO said the only way we'd ever get a new rotary is if Mazda could sell 100,000 of them per year. Meaning that, for the moment, you can forget about it.
And yet, last month Mazda was putting journalists in a Mazda2 RE Range Extender, an electric car using a 0.33-liter rotary to power its lithium-ion batteries when the charge runs down. With a 75-kilowatt, 100-horsepower electric motor turning the front wheels, the Wankel generator and its 2.6-gallon gas tank living under the trunk double the range of the electric-only Mazda2 to 250 miles.
There's been talk of using a rotary to assist an alt-fuel vehicle for at least seven years, with Mazda pairing an electric motor with a rotary that ran on gas and hydrogen in a Mazda5 in 2007. Since then, almost all of those stories debating its return or demise also spoke of the oddball motor's advantages, such as compact size and ability to run on various fuels, as an aid in an unconventional powertrain.