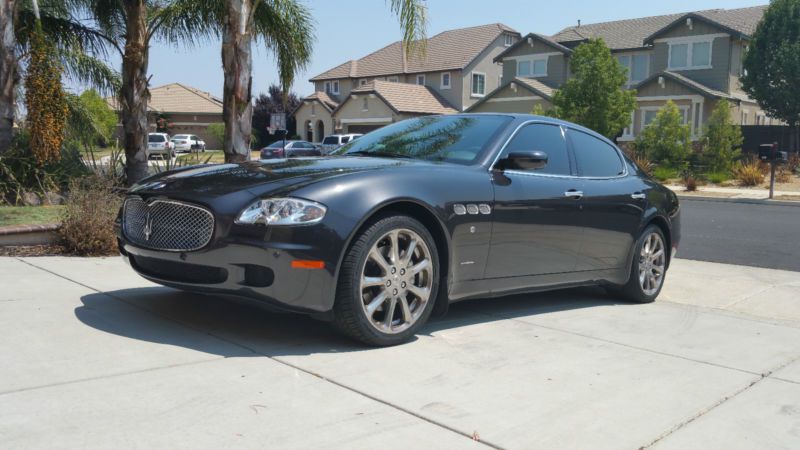 This is a 2008 Maserati Quattroporte Executive GT with 29K miles. The car has always been garaged AND covered. Car cover included! All maintenance performed by local Maserati dealership. The car runs and drives great. This car also has the ZF transmission. If you have owned the Maserati line of exotics before, the ZF tranmission saves you a few thousand dollars from servicing the clutch and a few more thousands in F1 transmission issues. I have had zero issues with the car.

This car is equipped a CD changer and Bluetooth integration, as well as well as iPhone / iPod integration with the ability to play video while the vehicle is in motion. It has Navigation and all the Navigation CDs are included. All books/manuals etc. are original and come with the car as well as the two original keys. The car also has a custom trunk bed with lighted Maserati logo! It also has a new battery.

Motor Tend technical director Frank Markus owns a 1967 Maserati Ghibli, bought back in the early 2000s when "they could be had for Camry money" - now Hagerty values them anywhere from $63,000 to $107,000. The grand tourer designed by Giorgetto Giugiaro outsold the more powerful and less expensive Ferrari 365 Daytona, and the more powerful and more expensive Lamborghini Miura.
Carlos Lago, host of the magazine's Ignition video series, figures it's because of the Ghibli's long-haul comfort and the tractability of its 4.7-liter V8 with 330-horsepower and 330 pound-feet accessed with a five-speed manual, even though he cites the powertrain and suspension as being behind the times.
There's no arguing about the Ghibli's sound, though. You can get several ears-full of it, as well as Lagos' and Markus' thoughts on the car, in the video above.

This is our clearest look yet at the next Maserati Quattroporte

The best look we've had at the next Maserati Quattroporte so far was found in patent drawings that could have substituted for a whole lot of other cars. But seen here is a more useful glimpse, courtesy of someone on the lookout in Italy who caught a prototype in a skin-hugging wrap.
Maserati has apparently gone with the Charles Eames philosophy on the redesign: "The details are not details. They make the design." The overall line is familiar - not such a bad thing even on this 10-year-old sedan - but the detailing appears to have been refined and made sleeker. The taillights themselves should make for an especially interesting feature if the camo'ed car can be trusted.
The next Quattroporte is predicted to be roughly 450 pounds lighter than the current car, and underhood grunt is expected to come from a 520-horsepower, 5.2-liter turbocharged V8 at launch, followed by a 420-hp, supercharged V6 supplied by Ferrari, both working through an eight-speed ZF transmission.