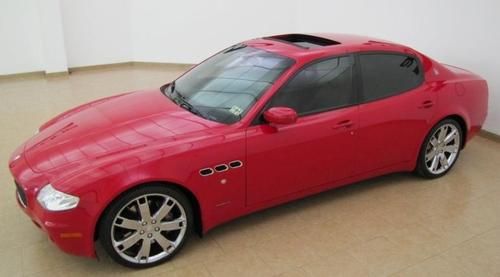 Europe's continuing financial woe is forcing automakers to get creative, and while Fiat may be scaling back its volume vehicles, it's looking to ramp up production of the exclusive Maserati brand. Following the debut of a new Quattroporte sedan, Fiat wants to boost Maserati sales to 50,000 vehicles by 2015. Maserati may lose as much as €7 million ($9.05 million) this year, and Fiat is betting big on Chrysler platforms and dealers to turn that around.
Currently regarded as a low-volume boutique carmaker, Maserati sold just 6,159 units last year, and 4,700 units through three quarters of this year. For 2013, Fiat boss Sergio Marchionne is targeting 13,000 in sales of the redesigned Quattroporte alone. Fiat apparently wants the brand's low volume image to change, hoping to position it closer to BMW and Porsche in the market.
The recent unveiling of the new Quattroporte will be followed by more new vehicle launches, including a crossover utility called Levante, and a long-promised sub-Quattroporte sedan, called Ghibli. The latter will share certain components with the Chrysler 300 sedan in an effort to optimize production costs. The Ghibli will be positioned to take on the BMW 5 Series and Mercedes-Benz E-Class. It's all in an effort to turn the profit tide for Maserati and its parent company Fiat amidst European economic turmoil.

Last year when Maserati revealed a plan to sell 50,000 units globally by 2015, it seemed like a pretty steep goal for an automaker that had sold just 6,300 units for the entire year. It turns out that goal may be a little on the conservative side. Through September, Automotive News Europe says the Italian automaker has already racked up 22,500 orders mainly on the backs of the redesigned Quattroporte and the all-new Ghibli, and there are still more new products in the pipeline.
Back in August, we heard that demand in China was playing a strong role in Maserati's big numbers in 2013, and this doesn't even include the upcoming Levante SUV, which Maserati CEO Harald Wester expects to add as many as 25,000 units to the mix when it goes on sale in 2015. According to the ANE report, the Quattroporte is still the most popular model with almost 10,000 orders so far this year, while the smaller and more affordable Ghibli is performing quite well with almost 8,000 orders; the aging, but soon-to-be-replaced, GranTurismo models have about 5,000 orders.