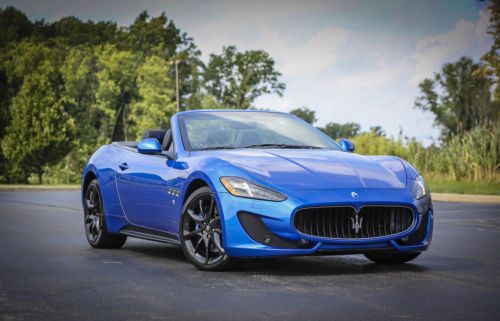 Maserati and Zegna to roll out limited-edition Quattroporte in Frankfurt

Back in April, Maserati announced a new partnership with men's clothier Ermenegildo Zegna. We wondered at the time how a Maserati could possibly get any more stereotypically Italian stylish, but now the Modenese automaker is presenting the answer in this fresh take on the new Quattroporte.
When the doors open at the Frankfurt Motor Show next week, Maserati will unveil the Quattroporte Ermenegildo Zegna Limited Edition concept car. That's their name, not ours, and if you're wondering how a production vehicle could be turned at once into both a concept and a limited edition, well... we don't know, either. Maserati says that it previews a production version to follow next year.
So, confusing nomenclature aside, what are we looking at here? For starters, there's a special platinum-color paint finish with tiny aluminum flecks and a gloss-black primer to give it that extra-deep luster. And the interior has been upholstered in "moka" and "greige," with leather seats, door panels and headliner and other surfaces finished in Zegna's own textiles.

Exotic automobiles are just that: exotic. As in, rare. While Maserati is trying is darnedest to emerge from the fringes, its products are still less common than competitors from Germany, Japan or even the UK. Which is probably - more so than any superior quality or safety standards - why we rarely see the Trident marque's products the subject of a recall. Although it does happen upon occasion.
Back in the spring, Maserati had to call in over seven thousand examples of the Quattroporte, GranTurismo and Alfa 8C over rust issues. Now that the new Quattroporte is upon us, the Modenese automaker has apparently run into another small problem.
This time the issue revolves around the wiring harness for the alternator/starter motor, an improper crimp in which could cause the battery cable to short and start a fire. As a result, the National Highway Traffic Safety Administration is prompting 63 owners of the 2014 Quattroporte GTS V8 to bring their cars in to their local Maserati dealer to have the wiring harness replaced.