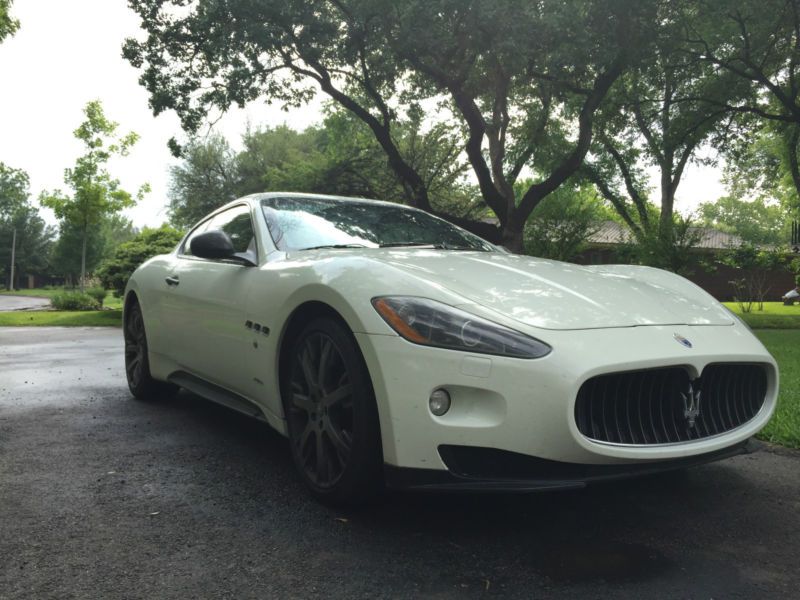 This is a gently used 2010 Maserati GranTurismo S (sports edition) that is Maserati’s high-performance
grand-touring sport coupe. This is Maserati’s fastest, lightest, and most powerful car in the brand’s lineup.
The 4.7 Litre delivers 433 HP with 361 lb ft of torque which propels the car 0-60 in only 4.5 seconds! Effortless
motion, drive quality, and handles like a dream. Compared to other grand-touring coupes like the Jaguar XK, BMW M6
or even the Audi R8, the GTS has Italian design on its side, with an unmistakable expressiveness and flair--and an
unmistakable engine sound--that simply isn't found in the more engineering-focused German grand-tourers.
This GT level of quality is not meant for just anyone. It's meant for the person who strives for a classy,
comfortable, and luxurious car, and yet it doesn’t sacrifice user friendliness. Even the rear seats are large
enough to accompany adults or a family without any concern for space. Rare is it to find a vehicle that has been
maintained this well and kept so meticulously, and of course, has never been smoked in. This vehicle's exterior has
been babied. The paint is in excellent condition with nearly zero flaws or signs of age, including an invisible
wrap around the front of the vehicle to guard against any scratches or incoming objects. You'll instantly stand out
with this hard-to-find 2010 GranTurismoS.

Kenny Rogers' country classic The Gambler is right about two things: you gotta know when to hold'em and know when to fold'em. A former Maserati salesman in Singapore is learning that lesson about when to step away from the table, after being sentenced to 33 months in prison for allegedly gambling away a customer's deposit of 350,000 Singapore dollars ($280,800).
According to Asia One, Allan Tan Buan Yuen was selling a Maserati in 2011. He told the customer that the car would take six months to arrive and cost 650,000 Singapore dollars ($522,000). While that may sound high, cars in the Asian country are notoriously expensive.
Yuen asked for a deposit of 150,000 Singapore dollars ($120,400), but instead of handing the money to the dealer, he placed the funds in his own account. Apparently, the customer didn't notice, and over the next few months Yuen received an additional 200,000 Singapore dollars ($160,400) towards the car from him. Clearly, this ruse couldn't last forever, though. When the buyer eventually inquired about his Maserati months later, Yuen admitted that he had already gambled away the entire fortune.

A week after its debut on the interwebs, Maserati has trotted out its freshened Quattroporte range at the LA Auto Show, giving us our first in-person look at the changes to the top-of-the-line GTS trim.
Maserati has tweaked the headlights across the range, while the GTS gains new body-color trim pieces on the lower bodywork. Red badging on the wheelcaps and and a freshened trident badge are some of the more obvious changes, while new lower bodywork is matched to the main exterior color. While these tweaks are nice, we aren't totally sure they deliver on the "sportier and aggressive appearance" that the Italian company is aiming for in model year 2015.
What do you think? Could Maserati have stood to go further for the 2015 Quattroporte, or is this sort of super-light freshening just what the doctor ordered? Let us know what you think in Comments.