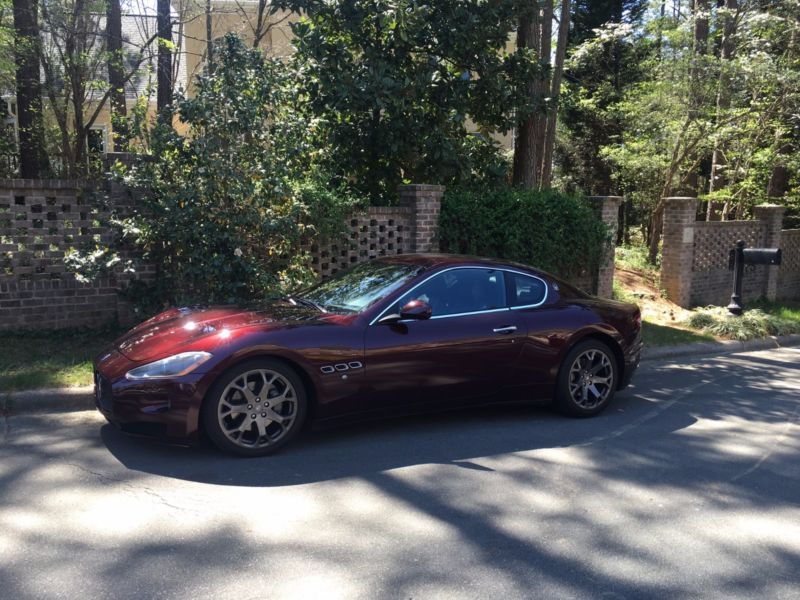 2008 Maserati GranTurismo
Beautiful car. The GranTursimo is a work of art.
Excellent Condition. Clear title. Clean Carfax. Service records included. No accidents, no dings. I just
recently had the nose painted to fix small chips.
The car sounds really nice. The Gran Turismo is known for the exhaust growl it makes.
The car has all the usual luxury features: heated/power seats, cruise, power windows/locks/mirrors, dual climate
control, tilt wheel, alarm system, Bose stereo, The car has adaptive headlights (the lights turn as you turn a
corner). It has paddle shifters.

Despite the fact that Maserati has yet to officially mention the next generation of its grand touring lineup, it seems like we know plenty of details about the upcoming range of Maserati coupes and convertibles. First we heard that the GranTurismo line would be growing to include three models, then we heard that new, smaller two-seater (possibly named Gran Sport) could be here by 2016 and, most recently, reports indicated that the GranTurismo's successor will feature more compact dimensions to better take on the Porsche 911.
Now Edmunds is reporting that the 2015 GranTurismo will mark a major evolution in the design language for the Italian automaker, while the Levante SUV will get the current styling cues found on the 2014 Quattroporte and 2014 Ghibli. The article also says that Maserati is planning to offer its models with a wider range of available colors and that it will introduce new limited-edition models as well all in hopes of selling 50,000 units globally by 2015.

Maserati Levante SUV may be built in Italy after all

In July Fiat halted its investments in Italy, putting on hold plans for the Maserati Levante SUV to be built at the automaker's flagship factory in Turin. But Fiat CEO Sergio Marchionne, whose company owns Maserati, met with unions on Wednesday, and he may announce plans to move forward with production of the SUV at the Mirafiori factory if the CEO and the unions reach an agreement, Bloomberg reports.
Marchionne is reportedly about ready to build new cars at Fiat's largest and oldest factory, on the grounds that 5,300 workers accept extended temporary layoffs through most of next year in a slowing European auto market. If unions don't accept the deal, it's not clear whether Fiat would still consider building the Levante at Mirafiori or not.
The Levante, Maserati's first SUV, is based on the Jeep Grand Cherokee platform, and we reported two years ago that it would be built in Detroit next to its Jeep cousin. Obviously those plans have been altered considerably in the intervening period of time.