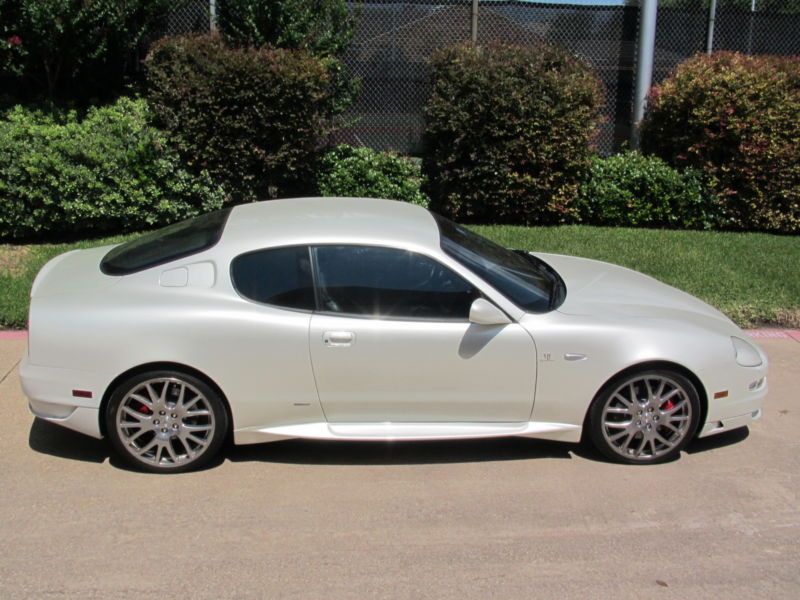 The monstrous exhaust is housed in a 4.2 engine (400HP) with red brake calipers ($550), 19" ballpolished GSport
rims ($1,190) and Maserati caps on the wheels to re-air the tires. The engine explains itself, coupling a 6-speed
"Cambiocorsa" Transaxle with a computer controlled clutch. The Skyhook Suspension ($2,500) supports stability and
control. The 4 wheels have an ABS braking, ASR traction control system and MSP stability control systems. These are
the support for this enhanced Italian sports car. The exterior has Xenon front lights and a modified exhaust, and
in the rear a smart "Maserati" of carbon fiber houses the rear plate.
The interior is exceptional with black leather seats and with red trim piping, with carbon fiber appointment and
steering wheel ($2,600 Interior 2). The seat memory and heated seats ($755) are also other options. The Pioneer
Premier Stereo with Bluetooth and CD, coupled with the subwoofer in the trunk are add-ons. Also, the Escort
Passport SR7 detector is included; say no more.

There are untold amounts of primping and set up that goes on in the days leading up to an international auto show. Of course, there are exhibits to erect, lights to hang and scripts to rehearse. There are also cars to prep. Usually the latter involves little more than removing finger prints and dusting, but in the case of Maserati the day before the Geneva Motor Show press days, the process apparently includes banging on the sheetmetal of one of your prized showcars like a crazed woodpecker.
We're not sure what caused a surface irregularity in the door skin of this 2014 Quattroporte - perhaps shipping damage - but it was interesting (and mildly painful) to watch, and hear, a show prepper attempt to repair this six-figure sedan with what looks like a jeweler's hammer, high-intensity light and soft cloth.
That'll buff right out.