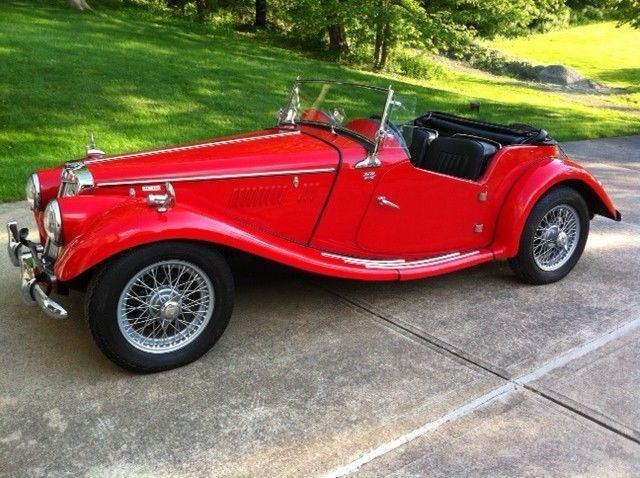 Year:1955
Engine:1500
Make:MG
Drive Type:standard 4 speed
Model: T-Series
Mileage:31,892
Trim:two seat roadster
Vehicle Title:Clear
For your consideration, a 1955 MG TF 1500 by the current owner.
Car HDR 43/7860 ; Engine XPEG 1734 ; Frame 7860
Car presents with 1,218 miles since complete engine XPEG 1008 overhaul. Correct large valve head for this 1500
engine as indicated by head part # AEF 118
All work completed on car and systems by professional mechanic and machine shop with receipts to verify.
Engine overhaul includes the following:
Engine block bored to .010 over with NEW pistons
Cranked turned and polished
Reground valves and seats
Surface ground head
NEW main bearings for crank and cam shaft
NEW flywheel, clutch and pressure plate, SU carbs, cooling hoses, camshaft
NEW water temp sensor with rebuild gauge
Spin on oil filter with rebuilt pump at 50 psi
Front suspension rebuilt
5 NEW Vredestein tires
5 NEW Dayton wire wheels
Brake system overhauled with various new parts
Several NEW chrome trim pieces
Included with the sale of car are the following as pictured: Variety of English hand tools (Whitworth),
jack, engine crank, spare 4 speed transmission, side curtains.
Wood structural components appear to be in good condition. Older paint shows normal wear with chips, flaking, and
crazing. The interior and top are vinyl.
This 1500 MG TF is a very mechanically sound and presentable classic but NOT concourse. Windshield wipers appear to
need new drive cable. Car is not driven in rain, so this has not been a problem. Ammeter reads incorrectly.
The TF Midget, launched 15 October 1953, was a face lifted TD, fitted with the TD Mark II engine, headlights faired
into the fenders, a sloping radiator grille concealing a separate radiator, and a new pressurized cooling system
along with a simulated external radiator cap. This XPAG engine's compression ratio had been increased to 8.1:1 and
extra-large valves with stronger valve springs and larger carburetors increased output to 57.5 bhp at 5,500 rpm.
In mid-1954 the engine capacity was increased by 17 per cent to 1466 cc and designated XPEG. The bore was increased
to 72 mm (2.8 in) and compression raised to 8.3:1 giving 63 bhp (47 kW) at 5,000 rpm and a 17 per cent increase in
torque. The car was now designated TF1500, and externally distinguished by a cream background enamel nameplate on
both sides of the bonnet, placed just to the rear of the forward bonnet-release buttons.
Production ended at chassis number TF10100 on 4 April 1955 after 9,602 TFs had been manufactured, including two
prototypes and 3,400 TF1500s. The TF was superseded by the MGA.
The MG TF 1500 was the best and last of the venerable T-Series. Only 9600 were originally sold and only 3400 of
those were of the TF 1500 model. The TF 1500's specifications were 4-cylinder, 1466 cc/63hp, 2bbl. The first TF
models were only 1250cc and were not competitive with the then offered Triumph TR2 and Austin-Healey 100. There
may be only 1000 - 1400 MG TF 1500s still in existence today. Many were lost on the 1954/1955 racing circuit.
Enthusiasts seek out the rare TF 1500 variant. Each TF 1500 sports "1500 Badges" on both sides of the hoods to
visually distinguish them.