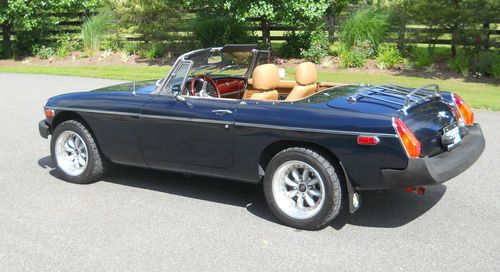 Condition: UsedA vehicle is considered used if it has been registered and issued a title. Used vehicles have had at least one previous owner. The condition of the exterior, interior and engine can vary depending on the vehicle's history. See the seller's listing for full details and description of any imperfections.Seller Notes:"See description for problems."

This car is a 1979 MGB that has been converted from a 4 cylinder to a V-8.  The Motor used in the conversion is a Rover V-8 / 3.5 liter.  This is the same motor that was used in the Triumph TR8 and all V-8 Land Rovers built until the early 2000s. In fact, MG built about 2500 MGB GT V-8s from 1973 through 1976. Unfortunately none of these were shipped to the USA, they all stayed in Europe. Interestingly, the aluminium V8 block is 40 # lighter than the cast iron, 4 cylinder motor found in all factory imported MGBs. The lightness of this motor does not effect the handling, as would a heavy, US built, cast Iron V-8 block. This car is a conversion, but built in a similar standard as the factory did for it's B-GT and later in the RV8. The following article from Wikipedia has a more complete history.  There is also an on-line magazine ( www.britishv8.org ) with hundreds of articles dedicated to the MG V-8.

"MG began offering the MGB GT V8 in 1973 utilising the ubiquitous aluminium-block 3528 cc Rover V8 engine, first fitted to the Rover P5B. This engine had been used in the A-body platform Buick Special and Oldsmobile F-85 and was the lightest mass-production V8 in the world. The Buick version had a dry, undressed weight of only 318 lb (144 kg), however by the time Rover had modifications to strengthen the block the engine was considerably heavier (170+kg). Some improvements were made by MG-Rover, and the engine found a long-lived niche in the British motor industry. These cars were similar to those already being produced in significant volume by tuner Ken Costello. MG even contracted Costello to build them a prototype MGB GT V8. However, the powerful 180 bhp (134 kW) engine used by Costello for his conversions was replaced for production by MG with a more modestly tuned version producing only 137 bhp(102 kW) at 5000 rpm. But 193 lb·ft (262 N·m) of torque helped it hit 60 mph (97 km/h) in around 8 seconds, and go on to a respectable 125 mph (201 km/h) top speed.

By virtue of its aluminium cylinder block and heads, the Rover V8 engine actually weighed approximately forty pounds less than MG's iron four-cylinder. Unlike the MGC, the V8 that provided the MGB GT V8's increased power and torque did not require significant chassis changes nor sacrifice handling.

Both chrome & Rubber-Bumpered GT versions of the V8-powered MGB were produced by the factory. Production ended in 1976. MG never attempted to export the MGB GT V8 to the United States. They chose not to develop a left-hand-drive version or to seek US air pollution emission certification of the MGB GT V8, although the Rover V8 engine was offered in US-bound Rover models throughout the same period and beyond. British Leyland Motor Corporation management cited insufficient production capacity to support anticipated demand for the V8 engine in  MGB GT, so they priced the MGB GT V8 high.[citation needed]

The MGB GT V8 was very warmly received by the automotive press, but British Leyland Motor Corporation was reportedly concerned that the MGB GT V8 would overshadow their other products, including the more expensive Triumph Stag. "       ( Wikipedia)
Specifications.
Rover 3.5L all aluminum motor ( 215 cu.in.)
Carter 4 barrel carburetor
Electric cooling fans
T5  5-speed transmission
Late model MG rear axle
15 x 7.5   BBS racing mag wheels
Toyo RA1 rain tires   205-50-15
Second set of 5.5x15 SAAB mag wheels  and 195-65-15  BF Goodrich tires.
Almost New top
Blaupunkt radio with cassette.
New carpet.
Mazda Miata seats
No Rust.........No Rust.......Good restoration   I would rate it at a 7.5 to 8 with a 10 being perfect.
Re-painted about 6 years ago Dark Metal Flake Blue.
Body in great shape no dings or dents. It is a nice paint job, using a magnet I found no signs of any body filler anywhere.
Please Note: The car is being sold as is, with no guarantee. This car was built in 1979,  making it  34 years old. However, a lot of time and money has been spent restoring the car and converting it to a V-8.   The restoration is between 98 and 99 % complete. There are some small things that don't work and for one reason or another I have not fixed. ( no time and no energy).
1.The tachometer  is not wired properly or may be bad????
2 Right rear blinker does not flash.
3. Interior gauge lights are not working.
4. the glass lens on the speedometer has yellow hue.
5. The original radiator on the car and may not be large enough for heavy city stop and go traffic.
6 The Miata seats show some wear.
7. The true mileage is unknown. The speedometer shows 11,334. It is my guess is that this is incorrect or it signifies the mileage since the conversion and restoration.
8. Windshield has 2 small chips that have been fixed. There is a brand new windshield ready for instillation. A job for the new owner.
9. Clock keeps lousy time.
10.The heater controls cables are not hooked up
This is a perfact car if you are mechanical or have a friend who can help. I did not rebuild the car or restore it. I do not know the details of it's past.  I purchased it sight unseen about 5 years ago as a project to convert it into a vintage race car. Upon delivery of this car I discovered it was to nice to take  off the street. In the past 5 years I have driven it less than 500 miles, replaced the carpet, upgraded the exhaust, had it on a dyno (Approx 150 bhp at engine). I have too many old cars and one has to go. I promised my wife I would clear out the race shop and that is the only reason this car is for sale.  The reserve is set at 10,500.00 that is less than half the price I saw for a similar car sell for last month on Ebay.
If you have questions please  email me at  lrgonda@cellularmaterials.com.  If you provide a phone number I would be happy to return your call and answer any questions you may have.