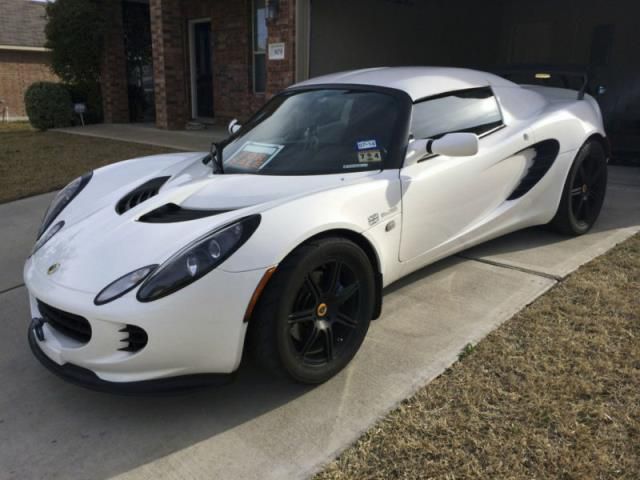 CARFAX Report http://www.carfax.com/cfm/FSBO.cfm?report=4763A9548C0095A0EA9EE86A334E3304 The Good Factory Eaton Supercharger (218 HP) P.P.I. at SoulSpeed Performance Cycle / Compression / Leakdown 1 / 220 psi / 93 psi 2 / 215 psi / 93 psi 3 / 220 psi / 90 psi 4 / 215 psi / 90 psi Lotus Sport Pack Hard and Soft Top Included LSS Wheels Toyo Proxes R888 Tires Traction Control Exige Fabric Sport Seats MY'10+ Carbon Fiber Rear Wing JanSpeed Stage II Exhaust Front Splitter Difflow 5 Element Original Diffuser TRD Cup Intake Full Aluminum Single-Pass Radiator (Temperatures: 186oF – 192oF) SSC Shift Cable (Confident Shifting) Sector 111 Lid Bone (Uninstalled) Monkey Wrench Racing Front Tow Hook Sector 111 Boomerang Rear Tow Hook (Uninstalled) Sound Deadening (Quiet Ride) Star Shield Clear Bra Protection (Factory Installed) Suede Door Skins LED Taillights The Not as Good Low tread on rear tires; Toyo Proxes R888 from Tire Rack = $420 for the pair Headliner starting to sag a little (Optional) Bodywork to repair previous spoiler mounting holes; $395 - $549 (labor included) assessed by Able Jimenes at 1st Class Collision Center $420 + $549 $969 total (I have factored this amount into my asking price) Email me with any questions: BuyMyLotusPlease@gmail.com Why am I selling? I have had my eye on an upgrade for some time now and cannot purchase one without selling the other. If you or anyone you know may be interested, please feel free to reach out to me at any time. I am a confident seller. I purchased this vehicle at 15,000 miles. Based on questions I have already received thus far, the sticky tires, tow hooks, spoiler, and diffuser were installed for aesthetics. This car has never been tracked, was never wrecked, and all body panels are completely original. Most of its miles consisted of highway travel to and from work in the Austin area upon arriving mid-2013. No maintenance is needed at this time outside of its next oil change. The last was completed at 23,800 miles and will need to be changed again around the 27,000 mile mark. If you are interested, I also have a pair of ramps purchased at Harbor Freight Tools should you not have a pair. Also Included Upgraded CDE 143BT head unit; CD, MP3, USB, Bluetooth, AUX compatible Hardwire connection for most radar detectors The car is equipped with keyless entry and comes with two keys Custom-fit Heatshield windshield reflector OEM diffuser Available for Added Purchase Uninstalled pair of new 5.25” JL C2-525x speakers and needed adapter rings = $140 Valentine One radar locator and windshield mount = $300

Times have not been easy for Lotus lately, so when its name came up on a list of companies scheduled for a liquidation court, it seemed like the end could be near for the fabled British builder of lightweight sports cars. As it turns out, Lotus was on the Companies Court Winding Up list in the UK due to a contractual dispute with a supplier, and the High Court has since dismissed the case.
According to Autocar, Lotus and the supplier actually resolved their issue earlier in the year, but the process couldn't be stopped until seen by a judge. The report says that the case was initiated when Group Lotus failed to pay some of its debts, which is probably a fair indication that Lotus is far from out of the weeds in regards to its financial difficulties.