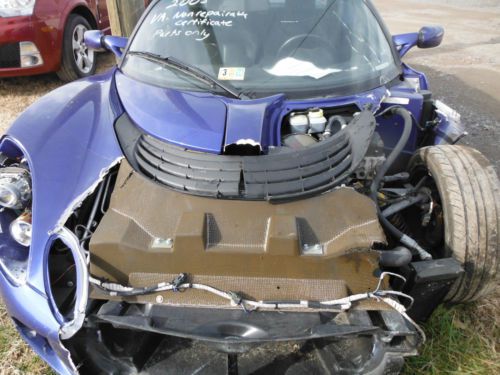 Elise Time Attack could be most extreme Lotus yet

The Lotus Elise has given birth to some seriously fast and varied machinery. Aside from Lotus' own models like the Exige, 2-Eleven, 340R and Europa, electric vehicles like the Tesla Roadster, not to mention the never-released Dodge Circuit and Detroit Electric SP:01, are all based on the Elise's platform. As were/are the Melkus RS 2000, the Opel Speedster/Vauxhall VX220 and the Hennessey Venom GT. But this could be the most extreme use of the lightweight chassis yet.
This Series 1 Elise has been built by one performance-obsessed Brit with a single purpose: to compete in the UK's Time Attack championship. For those unfamiliar, Time Attack is something like a rally or a hillclimb event, only it takes place on a racing circuit. Each vehicle goes out on the track by itself and sets the best time it can, without needing to worry about other competitors until the finish line is crossed and it's the next racer's turn. That's what drove Lee to modify his Lotus so thoroughly, with more wings, diffusers, flaps and carbon fiber than a Boeing factory. Check it out in the video below.

Lotus Esprit all but ready to go, but held back by management issues

Brief and disappointing is this report from Autocar on the status of the Lotus Esprit: it is finally ready and sitting at the light, but the light might not go green for a long time. The good news is that from being a concept two years ago at the Paris Motor Show, the aluminum and carbon fiber revival coupe is "purportedly almost finished." It is powered by a twin-turbo, 5.0-liter V8 with something like 650 horsepower, boosted by a kinetic energy recovery system (KERS) and shifting through a seven-speed paddleshift transmission. Even with all that, the UK price is said to be around that of a Porsche 911 4S Cabriolet, and the car only needs "signing off and minor tweaking."
The bad news is that former company owner Proton couldn't stay independent long enough to see through the company's ambitious five-concept-car assault - led by then-CEO Dany Bahar who was hired explicitly to lead such a campaign - and was swallowed up by Malaysian auto supplier DRB-Hicom. For a brief spell Lotus had to shut down production for lack of funds. Then the new owner cleaned house, sweeping out Bahar and, according to the Financial Times just one month ago, the Esprit and every other concept with it. Just after the FT piece came out, Lotus denied the Esprit had been canceled. Still, according to Autocar, the management whirlpool is keeping the Esprit "far from becoming a production reality."
If we're honest with ourselves, we'll keep in mind that the Esprit has been slipping into and out of a terminal ether for what seems like decades. None of us knows what is going on inside Hethel HQ, but the fact that there really is a lightweight, twin-turbo, 650-hp Lotus Esprit finally ready to be produced has to be, in spite of all else, very good news.