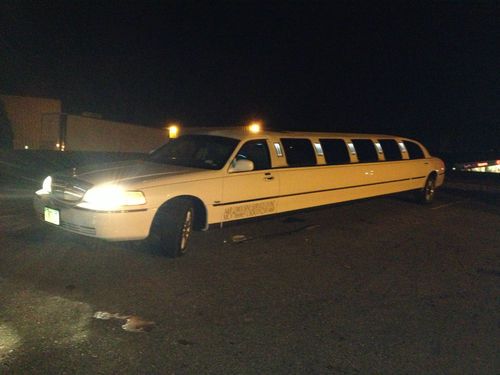 2004 white lincoln town car 180" stretched , baige colored alternating 3 seat interior , mirriored divider frame with fiber optic star gazer , serpentine star gazer ceiling , RGB lighting with Fiber and LED beautiful limo inside and outside , rear control CD/dvd/ice chest With only one previous owner, this automobile is ready for you.This is a smoke-free automobile..This is a garage kept vehicle.The engine on this vehicle is running properly.This vehicle has no known defects.The exterior of this vehicle is  clean. clean interior. Absolutely no rips, odors or abuse..The mileage represented on this vehicle is accurate.There are no signs of prior damage on this vehicle..This vehicle has a smooth shifting transmission.All power equipment is functioning properly. This car had been DOT certtified. So brakes are changed rear has been changed the rear suspension is heavy duty , Tires are to code.the car had front bearings done. Emergency exits non smoking. The is slight damage on right side of car.(pictures will show) I am down sizing my fleet. Also will be putting up my 1964 Austin princess....Thank you and happy bidding