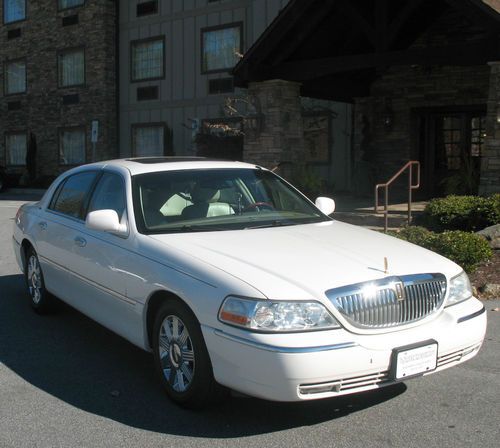 This vehicle is used for livery service.

This vehicle is used everyday, until sold, so mileage will slightly higher.

We are replacing this car with a Lincoln Navigator

It has has marks and sctratches on the bumpers and a dent on the drivers door and front fron left fender. (See picture)

The tires were replaced in August 2012,

The brake pads were replaced and the disks resurfaced recently including the parking brake.

The air conditioning  compressor was replaced in 2011. The car was tuned up in July 2012.

This  car is used everyday so mileage could vary a little.

We have 2 keys and 2 working remotes as well as the original manuels.

This car has been serviced regularly.

The premium Alpine Radio has an indash CD and Cassette player as well as a trunk mounted CD changer.

There is antenna for syrus radio on the car.

The car has the Gold Cartier Package, 2 Gold letters (A & R) are missing on the trunk.

The chrome wheels are in very good condition.

This is relisted do to buyer not making the deposit or contacting me within the required time.