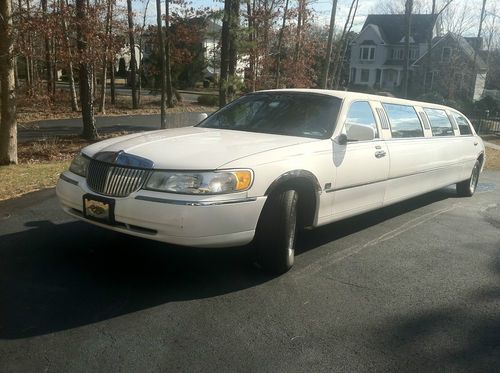 Condition: Used: A vehicle is considered used if it has been registered and issued a title. Used vehicles have had at least one previous owner. The condition of the exterior, interior and engine can vary depending on the vehicle's history. See the seller's listing for full details and description of any imperfections. ...
VEHICLE WILL BE SOLD AS IS!!!
2001 White Lincoln Towncar Executive Stretch Limousine
This vehicle is in good condition. Only 85,543 miles!!
It has a leather top with natural wear and tear to it.
There was one known owner of the vehicle before current owner purchased it as stated by the dealership.
There are no issues with the engine, transmission, or brakes. Gas lines have been cleaned out and a new fuel pump was installed as of February 2013.
No known bodywork has been done to the vehicle. There are minor scratches and dents on the rear of the car. The leather interior is great condition.
Everything you need to stock and consume amenities is included and in excellent condition.
If you have any further questions please email me at fjr@jerkinsent.com with the subject LINCOLN TOWNCAR LIMO