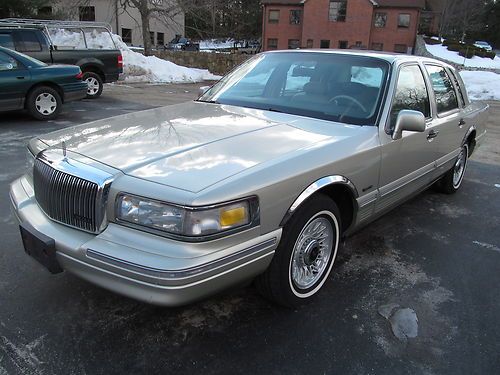 1997 LINCOLN TOWNCAR SIGNATURE SERIES WITH ONLY 62,000 MILES. LAST OF ELEGANT BODY STYLE. SAHRP LIGHT CHAMPAGNE METALLIC WITH MATCHING LEATHER INTERIOR.  FULLY LOADED WITH ALL CREATURE COMFORTS. ALLOY WHEELS. VERY CLEAN INSIDE AND OUT, RUST FREE VEHICLE. BODY AND PAINT ARE VERY NICE AND IS 80% ORIGINAL. THE HOOD AND DECK LID HAVE BEEN PROFESSIONALLY REFINISHED AND THE COLOR MATCH IS EXCELLENT. INSIDE SHOWS GREAT CARE. DASH, DOOR PANELS AND HEADLINER ARE 100%, ONLY NORMAL WEAR ON LEATHER SEATS AND CARPET, NO HOLES OR SPLITS. TIRES HAVE 60% LIFE ON THEM. THE UNDERCARRIAGE IS UNBELIEVABLY CLEAN. VEHICLE HAS 4.6L V8, RUNS AND DRIVES LIKE NEW. NO DASH WARNING LIGHTS ON. POWER EQUIPMENT FUNCTIONS PROPERLY. THIS IS AN EXTREMELY NICE, LOW MILEAGE EXAMPLE OF THIS GREAT BODY STYLE, HOWEVER IT IS NOT PERFECT AND IS A GENTLY USED VEHILCLE. THERE MAY BE SOME SCRATCHES, DINGS OR A FADE. YOU ARE WELCOME TO VIEW THE VEHICLE IN PERSON AND CAN BE SEEN AT OLD TIME AUTO SALES, INC. 294 WEST ST. MILFORD, MASS (508) 478-6907 OR CALL GEOFF ON CELL # (508) 498-5789. VEHICLE WILL BE SOLD WITH PREVIOUS RHODE ISLAND REGISTRATION, AS RI DOES NOT REQUIRE TITLES AFTER VEHICLE ARE 10 YEARS OLD. PLEASE BID ONLY IF YOU ARE SERIOUS. NO NEGATIVE OR BIDDERS WITH UNDER A FEEDBACK OF 10. THANKS