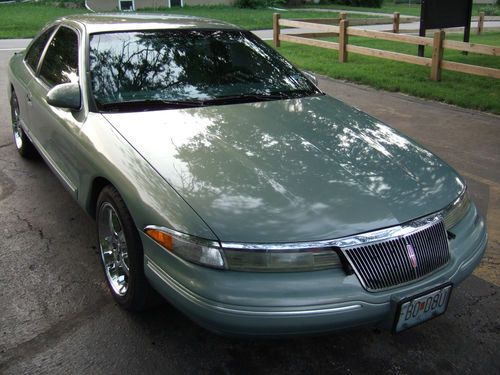 Condition: UsedA vehicle is considered used if it has been registered and issued a title. Used vehicles have had at least one previous owner. The condition of the exterior, interior and engine can vary depending on the vehicle's history. See the seller's listing for full details and description of any imperfections.Seller Notes:"The rear seat as a small crack where the factory threads are coming apart. There are several small cracks in the front and rear seat's leather. There are a few minor dings. The windshield has several very small imperfections. There is a small dent above the rear bumper on the right side."

Stunning 1995 Lincoln Mark VIII. A Mustang in a Tuxedo. 4.6L V8 FI DOHC 32V Rear wheel drive. 117,000 miles. Willow green (ZG) chameleon exterior color, the most exclusive cover ever used. Interior is Evergreen Frost (218 only made with this color in 1995.) Very clean with original floor mats. Leather seats. New headliner. The rear seat as a small crack where the factory threads are coming apart.Brand new Kenwood CD player stereo just installed. Tinted windows. Aftermarket 17" Cobra R wheels. with brand new tires mounted at 115,704 miles with alignment, warranty and road assistance paperwork.I also have the 4 original Lincoln wheels with the old tires I'm giving away with the car. It has the factory remote keypad and the keyfob that work. The car has had its original trouble some air ride suspension converted to conventional coil springs for easy maintenance. Tokico struts and shocks (series blue)A very sporty car that rides wonderfully. New Castrol Titanium Synthetic oil change (May 2013) New rear differential fluid. (November 2012).Transmission fluid and filter replaced (September 2012)New front and rear brakes with new cross drilled and slotted rotors-stop.Last tune up with Taylor Plug wires, fuel filter and spark plugs, new radiator, hoses, belt and starter in 2011, Front struts and rear shocks, upper and lower ball joints, strut rod bushing, front and rear sway bar bushing in 2011. No rust no dents, just a little ding on the rear end above the bumper. No leacks. A very strudy iconic car that provides a very strong body. Driver and passenger airbags.I have 3 classics and I need to downsize. This is a local car with a clear title.  Thanks. JUNE 29  C A R FA X  AVAILABLE FOR YOU TO REVIEW AT NO CHARGE WHEN YOU COME TO SEE THE CAR. *****************************************PLEASE CALL OR TEXT 816-604-8621 BETWEEN 6 pm and 9pm or week ends 9am to 9pm CST THANKS!********************************************************