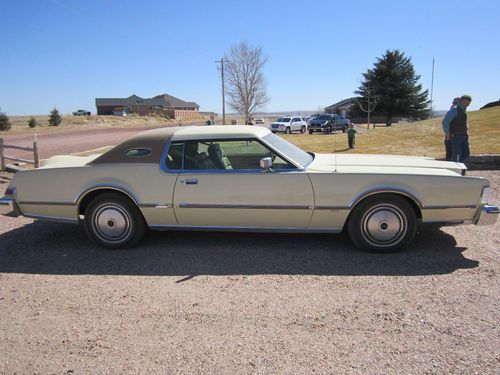 This car is a nice 2 owner, 2nd owner bought it in 1980. The car is located in Torrington Wyoming, not alliance Nebraska. It hasn't been driven much in the past 10 years but has been driven once in a while locally.  It was repainted 10 years ago and has a new front grille, fenders, and hood at the time and they forgot to put a letter on the back of the car as you can see in the pictures.The car has a small amount of rust underneath the paint on both front fenders. The vinyl top is starting to crack and may need replaced, including some of the trim around the car. The power steering was fix by a ford garage recently but it still doesn't work quite right. The tires have less than 10,000 miles on them. The heater works but the a/c doesn't. The interior is in good shape including the seats and the carpet. Had regular oil changes and has been stored in the garage most of its life. The car runs and drives good. Buyer is responsible for pickup and I need a $500 deposit when auction has ended. Horns on the front don't come with the car sorry.