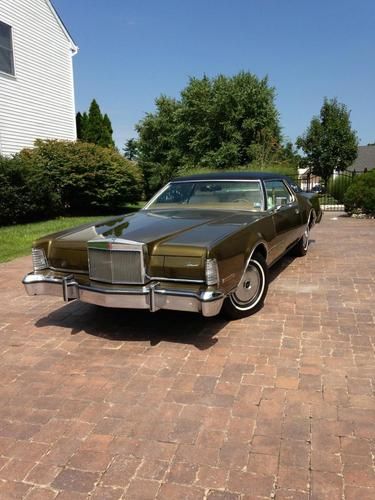 Condition: Used: A vehicle is considered used if it has been registered and issued a title. Used vehicles have had at least one previous owner. The condition of the exterior, interior and engine can vary depending on the vehicle's history. See the seller's listing for full details and description of any imperfections. ...
-1974 Lincoln Mark IV completely unmolested, never restored.
-All original except for appropriate maintenance such as engine/transmission fluid changes front brakes, tires and a rebuilt master cylinder which was leaking prior to its replacement.
-It has been covered in a heated/air-conditioned garage its whole life and has been well taken care of.
-No Rust
-No Leaks
-43417 miles
-Runs great.
-clean title
-Medium Dark Gold Poly (6M)
-operating power windows, power seats, concealed headlights, and power antenna.
-A/C and Heat work great.
-original spare tire
-Back seats are in mint condition, where as the front are in good shape with a few cracks in the leather seats.
Contact at
zoubroulis.chris@Gmail.com