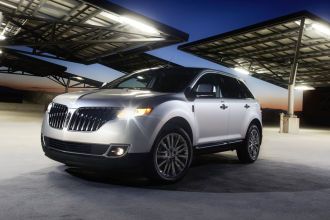 This color is very unique, Depending on the time of day, it takes on different shades. This unit has the optional package of the interior WOOD package. And the sun roof is not your average sun roof.. It's a Panoramic Vista Roof !! Call us for a test drive. 888-781-1088 Gene Lewis Ford has been a Ford Family since 1912, please feel free to talk to one of the Lewis Brothers. Jim, Steve or David. We would be more than happy to sell you a vehicle. 888-781-1088. Debbie Breedlove will also be able to assist you with any new or used purchase, as she has been with Gene Lewis Ford since 1984. We are located just northwest of Indy, about 25 minutes from downtown Indy. Just off I65 at Exit 138, in Lebanon Indiana. Please feel free to visit our website for more information. Thanks for your interest in one of our vehicles. Gene Lewis Ford has been a Ford Family since 1912. We are a small Family owned dealership, that prides ourself in repeat loyal customers. Just off I65, Exit 138 in Lebanon, and only 25 minutes from downtown Indy. Please feel free to click on our web site at www.genelewisford.net and get your FREE VEHICLE HISTORY REPORT thru Autocheck.