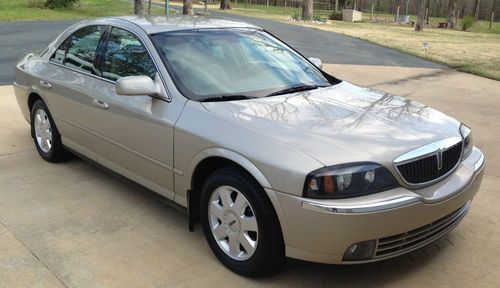 This CarFax Clean one owner Lincoln LS was purchased as a demo unit from the Ford Lincoln Mercury Dealer in Jonesboro, Arkansas in 2004. It was driven by the dealership owner and had 7,485 miles on it when it was purchased by the previous owner. Unfortunately, the family of the elderly lady that owned it had to make the decision that it would not be safe for her to drive anymore so I purchased the car from the family.

The car is very clean all the way around. Underhood and trunk look great. I just put a new set of tires on the car, had it serviced, and it has a new battery as well. The car has power everything and everything works as it should. AM/FM/CD/Cassette, Tilt/Telescopic steering and Adjustable foot pedals. Detailed and ready to go. The only thing I think it might need is possible u-joints, slight vibration when you let off the gas. Otherwise, super solid car for the money.

Sold "As Is".  Inspections are welcome and encouraged.  CarFax report included.  Cash only, thanks.