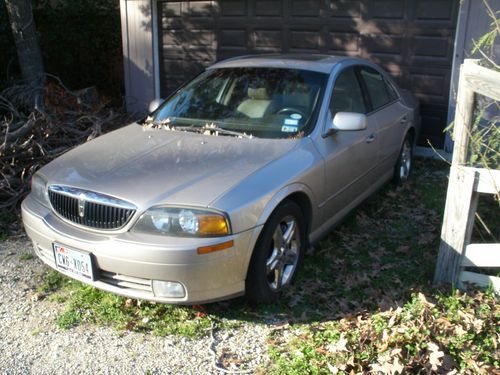 Nice, clean 2002 Lincoln LS 3.9 L V8.  NEEDS FUEL PUMP.  LOW RESERVE!  Top of the line sports model.  Every option.  Power moonroof, power everything, dual zone A/C, 6 disc CD changer, 17" wheels.  I bought this car about a year ago from a dealer in Grand Prairie, TX.  I was commuting back and forth to Livingston, TX weekly.  During one of the trips, the thermostat housing blew.  I had it towed back home to Livingston, and found that it was not unusual for this model.  The part appears to be metal, but it is plastic.  As suggested on the internet, I replaced it with the aluminum Jaguar part (same engine in Jaguar 4.0 and Thunderbird).  After replacing the part, I test drove the car to town (2 miles) and found that the OTHER cooling tube had a crack in it as well.  This is a pressurized system, so that had to be replaced also (it has been replaced).  I ordered the part, but then had to leave the country for 6 months.  When I returned, the car would turn over, but not start.  I tried starting fluid and it started right up but would not stay running.  I started process of elimination.  I checked out the fuses (fuel pump fuse was blown).  I replaced the fuse, and it did not blow again, but still no go.  I swapped out all the relays and diodes that handle the fuel pump. No go.  Then I replaced the fuel filter.  At that time I tested for fuel and verified that no fuel was getting to the engine.  Someone came and checked the computer codes, and it said bad fuel pump driver control module. On this car, the DCM is located inside the rear electronics module, so I replaced that also.  No go.  I verified that power was getting to the fuel pump connector, so I finally pulled the fuel pump.  The fuel lines did not come out as they were supposed to, so I had to cut them.  I had located a fuel pump at a wrecking yard in Lufkin, but when it was pulled, it was badly rusted and unusable.  I have since purchased a new fuel pump (only), but it has not been installed and the cartridge that the pump fits into may need to be replaced, or parts of the two I have combined into one.  So as it stands right now, the fuel pump is out of the car, I have an EXTRA rear electronic module, two fuel pumps in various states of disrepair plus a new pump.  I purchased a second set of fuel lines and have snaked them into position, but they kinked at various times during the install and may need to be replaced again also. The car also has two new front tires.  The fuel pumps (there are two) are easily accessible under the rear seat.  I don't have the time or money to continue with this saga at the moment.  I've done most of the work, and have well over $5,000 in the car, but the high bidder can bring a car trailer and can get it out of here.  Clean title in my name.  Inspection sticker expired the end of February, tags are good through the end of April.  161,000 miles.  Feel free to request additional pictures of any part of the vehicle.  There are a few door dings, some cracking of the drivers seat, a scrape to the area around the rear left tail light (which was replaced), and a few evidences of smokers in the car.  I have the original manuals for the car, and it appears to have had only one or two owners.  See the vehicle history report for verification.  I work 12 hour days and just don't have time for this.  Come and get it!  Good Bidding!  $500 deposit due within 24 hours of winning the auction, and full payment due within 7 days at time of pickup.  VEHICLE SOLD AS-IS.  IF YOU HAVE ANY QUESTIONS, ASK THEM BEFORE BIDDING!

Lincoln has already announced most of the trim level and option pricing for its upcoming 2015 MKC due out this summer, and now it has launched a configurator allowing prospective buyers to get a better idea of how this new model will stack up against other compact luxury crossovers. We already knew that the MKC will have a starting price of $33,995, but now we know that its price includes a destination charge of $895.
Models equipped with the base 2.0-liter EcoBoost engine come standard with the Premiere package - $33,100 for front-wheel drive and $35,595 for all-wheel drive. Both models offer equipment upgrades from the Select and Reserve packages. The $3,230 Select package adds features like leather seats, power passenger seat, folding and heated door mirrors and painted 18-inch wheels, while the pricier $6,935 Reserve package adds in heated and cooled front seats, panoramic roof, hands-free liftgate, two-tone wheels and an embedded modem (providing features such as remote lock and unlock, vehicle finder and pre-conditioning).
Opting for the new 2.3-liter EcoBoost inline-four raises the base price to $39,965, and it comes standard with all-wheel drive and all of the equipment in the Select package; the Reserve package is still optional. All models can be further optioned up with the $2,235 Technology Package (adding adaptive cruise, active park assist and lane keeping system) and the $580 Climate Package (heated rear seats and steering wheel, auto high beams and rain-sensing wipers). Checking all the options, a fully loaded 2015 MKC with the 2.3-liter EcoBoost will have a total MSRP of $47,715.