An American Classic, Amazing Sound System, 20 In Rims, Power Everything, A/c on 2040-cars 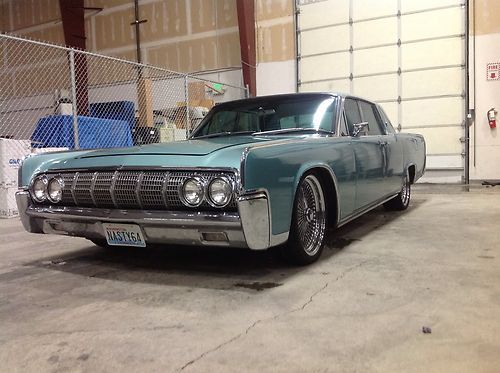 1964 lincoln, i"ve owned it the last 9 years, always covered and kept in heated space, a truly sharp car, a small amount of surface rust under the hood and trunk. I"ve added an electric fuel pump, AM/FM CD/MP3 player with a toggle switch under the dash. 2 -12 in subs, custom kick plate with mids and tweets, the kick plates held in place by two factory screws that were replaced by longer screws, the originals are in the glove box. the stereo"s secured with 2 zip ties so no damage was done to the interior in achieving amazing sound. I have the original rims and hub caps to go with the vehicle. but it"d be impossible to say that the 20 inch rims don"t set it off nicely. I"ve put about 13,000 miles on her since i brought her home, a real treat on nice western Washington days. My father told me the 1st time he saw it, "if your grandfather was alive, this would be one his favorite moments" this car will get ya anywhere your going, and bring lots of long stares, smiles and honks all the way... my stepfathers passing is got me looking to give her a new home, but we spent all last summer enjoying it while he visited, your turn to make amazing memories..