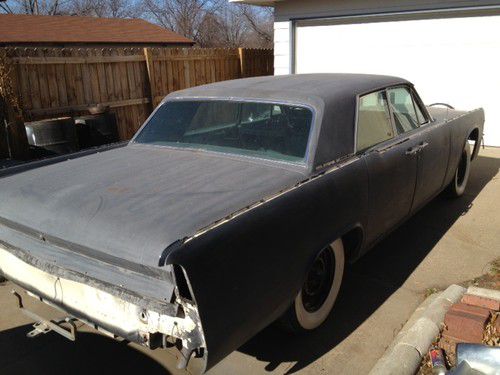 Up For Sale is my 1965 Lincoln Continental Suicide 4 Door. The car is in dang near rust free condition with only a couple spots of rust no bigger than a dime. There are car has a few dings here and there, but for the most part the body work has been done. The front passenger side of the seat is torn, but the back seat, headliner, door panels, interior trim, and all chrome besides 1 piece are in good condition. I have the bumpers, they are chrome but have normal pitting.  The motor runs good, and hard but the fuel tank needs cleaned, and it needs a driveshaft for it to be driveable. The glass is in good condition, and all of the windows roll up and down. I picked it up as a project, one day hoping to finish it....but it's time for it to go due to recent issues. The car will be sold with a bill of sale only. The Original title was in a house fire, and I bought it with no title.  Shipping arrangements MUST be made by the Buyer.

Let me know if you have any Questions