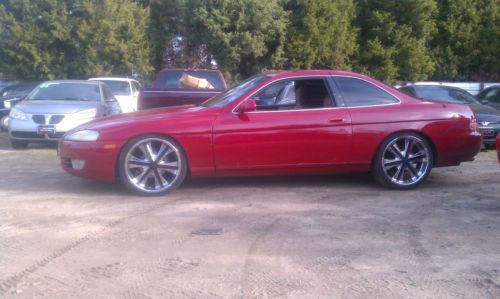 Sometimes you come across a list of ingredients and you don't even need to know what's being made, you just know you need to be there when it's done. So if you saw a recipe for a Vimeo video that was one snow-covered frozen lake, one Lexus IS, four studded tires, two ice fisherman and one guy lounging on a couch, do you think you'd have any questions?
We didn't. The dish was cooked up by the Wide Open Drift Team and KSP Productions, and it's exactly what you'd think it is. Right down to the guy on the couch. We're glad we got to partake, and you can too in the video below.

Rumbling into the slot between the Lexus RC 350 Sport Coupe and the RC F is this, the RC 350 F Sport. Debuting at the Geneva Motor Show next week, the intergalactic malevolence of that spindle grille is given further aggression with a mesh treatment and 19-inch F Sport mesh wheels in dark metallic. Traditionally, F Sport models have also brandished unique fascias, but the standard RC is so visually aggressive to begin with, it still ought to throw quite a scare into rivals like the BMW 4 Series M Sport.
Bigger identifiers come in the cabin and under the skin, foremost being the redrum-reminiscent Rioja Red leather treatment and Silver Performance trim, perforated leather wrapped 'round the steering wheel and a moving center ring in the dash cluster inspired by the LFA. When the coupe is put into Sport+ mode, the included adaptive damping will kick in, and buyers can optionally order the four-wheel steering system when the car goes on sale in the US this fall.
There's a press release with info and specs below, a high-res gallery above and a bright lights, big city introduction on March 4 in Geneva.