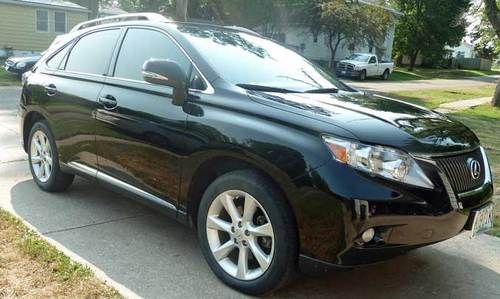 Condition: UsedA vehicle is considered used if it has been registered and issued a title. Used vehicles have had at least one previous owner. The condition of the exterior, interior and engine can vary depending on the vehicle's history. See the seller's listing for full details and description of any imperfections.Seller Notes:"Purchased as a Lexus certified pre-owned vehicle. Recently replaced windshield due to rock chips"

Luxury awaits your family in this 2010 AWD Lexus Rx 350 SUV.  Ride comfortable in the leather seats with air cooling or heated power.  Recent additions to this vehicle include tinting in the front windows and a new windshield.  This vehicle was previously owned and went thru the Lexus certification as a certified pre-owned vehicle before present ownership.  The miles that have accrued are mainly highway miles due to work commutes on the interstate.  As the daughter of a mechanic, all oil changes have been completed in a timely manner.  Currently only 1 have remote for keyless entry.

In case you needed more proof that the Lexus RC F is a statement car intended to scream "This is not your father's brand" (yes, we're paraphrasing the tagline of another automaker), here it is: the Lexus RC F GT3 Racing Concept. Lexus introduced a GT500-spec version of the RC F at the Tokyo Auto Salon last month, but this GT3-spec entrant and its Reading Rainbow paint job will get to show off at the Geneva Motor Show to whet the appetites of European racing outfits.
Although referred to as a concept, it will shake that name off when it completes a season of testing this year. Next year, Lexus will make it available to paying customers, and says the car will be cleared to race in the Occident and in Japan's Super GT series alongside its GT500 cousin.