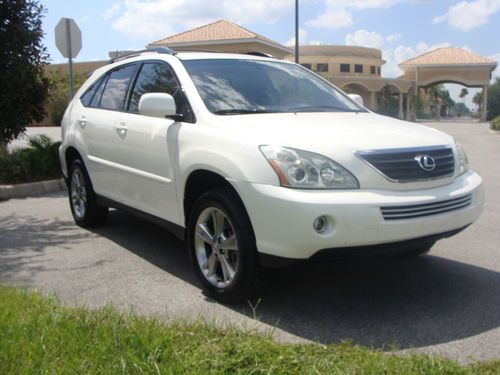 TIRES   NEW ON FRONT REARS 75% LEFT .CAR WAS BOUGHT NEW  AT LEXUS OF ORLANDO AND THEN RESOLD AS  A CERTIFIED PER OWNED LEXUS WITH ALL RECORDS AND BOOKS ALWAYS GARAGED. NEEDS NOTHING MECANICALLY SOUND, HONEST CAR!! ANY QESTIONS CALL ROB AT 352 4064704

Just five months ago, our spy photographers caught what appeared to be a mule for the forthcoming Lexus NX crossover with the body of a CT 200h for disguise. Then the LF-NX Concept CUV debuted at the Frankfurt Motor Show (it showed up at the Tokyo Motor Show as well) with a massive spindle grille and an extreme version of Lexus' sharp-edged new styling language on full display. Now Auto Express reports that a production version of the LF-NX concept will grace the Geneva Motor Show next March and go on sale next summer. If the names that Lexus trademarked a while back are any indication, it'll come in two trims, NX 200t and NX 300h.
Concept vehicles often look outrageously bold, with more extroverted styling than what eventually makes it into the production version. But Lexus reportedly will leave much of the LF-NX concept's styling alone for the production version, citing its customers' changing tastes.
"What we're finding is that these days customers want to be more expressive, so a lot of the concept's inherent design will come out in the finished car," says Paul Van der Burgh, Lexus' European director. "Why would you want something that looked like everything else in the segment?"

The Lexus LX SUV is a very muscular, old-school vehicle. Based on the Toyota Land Cruiser, it's still a big, body-on-frame SUV, but inside it offers acres of leather and luxury tech. The brand's Kuwaiti distributor is taking it machismo even further for the local market with the new LX 570 Supercharger.
As the name suggests, the upgraded SUV grafts a supercharger onto the LX 570's 5.7-liter V8 to boost it to 450 horsepower, from 383 hp in the naturally aspirated version in the US (or 362 hp in the standard Kuwaiti version), and it uses the same six-speed automatic as the standard model. To signal the improved strength, much of exterior chrome is replaced with black trim. It also wears special 20-inch wheels and a rear spoiler. The interior is fitted with crimson leather seats and red-accented carpet. It also gets an aluminum sill plate that says "Supercharger." Like the standard Kuwait-spec LX 570, it has two fuel tanks with a total combined capacity of 36.46 gallons, which should help satiate the likely thirsty, forced-induction V8.
The LX 570 Supercharger won't be rumbling down streets outside of the Middle East, though. According to Lexus spokesperson Bill Kwong, this is a project by the distributor in the region. The supercharged engine also has "issues with emissions" in the US, especially in California, he told Autoblog. Too bad, it would be an interesting Range Rover alternative.