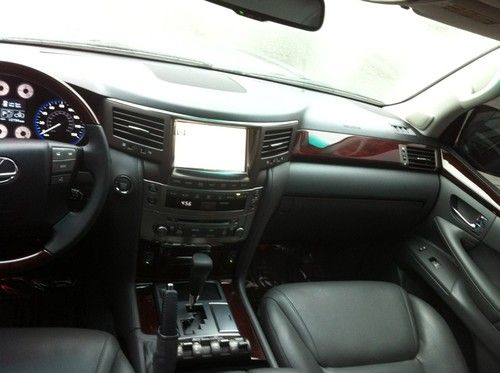 Please contact me before you bid.The last price is 29900.

Selling my 2010 lexus lx 570 black onyx with black interior inside look new smell new, rear entertainment, cooler box, has all  options except heated steering wheel.     Look new all around. has clear bra. no previous  paint works of any kind.  Never been in any kind of accidents has clear  carfax clear title.  title in hand has no liens.

Meet the all-new NX, Lexus' entry into the space occupied by the likes of the BMW X1 and Mercedes-Benz GLA. Based off the LF-NX Concept and sharing much of the design language seen on the polarizing IS sedan, the NX looks to be a rather sporty Lexus crossover.
The big news here is under the hood: the NX will be the first Lexus to use a turbocharged engine. That's right, a 2.0-liter, turbocharged four-cylinder can be found in both the NX 200t and NX 200t F Sport. There will also be an NX 300h, and if Lexus' nomenclature remains consistent, we already know all about that one. As of right now, there aren't a lot of details on either powertrain, although with the NX's Beijing debut still over a week away, here's hoping we know more soon.
As for that design... well, we're waiting to see it up close. The initial reaction from the Autoblog team has been mixed so far. Like the IS, there are plenty of sharp angles, while the front is dominated by the brand's spindle grille. Lexus' designers have refined the shape of the headlights, giving them a cleaner overall look than on the pioneering IS. In back, LED taillights come standard. According to Lexus, 17-inch wheels are the base rollers, while 18s are optional.