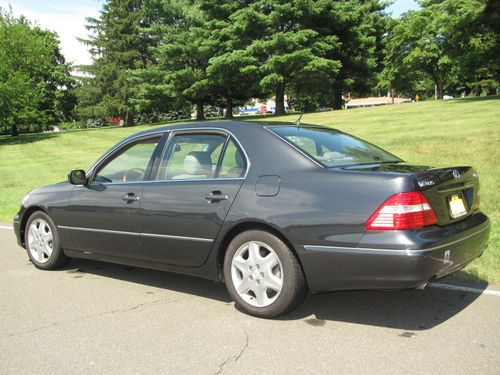 Condition: UsedA vehicle is considered used if it has been registered and issued a title. Used vehicles have had at least one previous owner. The condition of the exterior, interior and engine can vary depending on the vehicle's history. See the seller's listing for full details and description of any imperfections.Seller Notes:"Unique opportunity to purchase a pre-owned fully loaded Lexus in excellent condition, which has been expertly chauffeur driven through its 120k mile lifetime. It now comes to market as its previous owner is on a different highway and has traded wheels for wings. Well maintained & regularly serviced with full service history available from any Lexus dealership. Started life as a showroom model so every conceivable extra is probably included and is here for your added luxury.Full specification available and pictures attached.Please note this item is sold as seen, is in excellent working order and has a couple of minor cosmetic stone chips (photographed for your information)."

Fancy yourself an example of Lexus' take on the BMW 4 Series and Audi A5? Well, now you can customize your very own RC on Lexus' consumer website. With prices starting at $42,790 for a rear-drive model while an all-wheel-drive RC kicks off at $45,025. Neither price includes Lexus' *$925 destination charge.
With a wild (by Lexus' standards) color palette and the option of regular and F Sport trims, there's a fair amount to play with in this configurator. That said, it follows the brand's typical strategy of offering colors and upholsteries along with a wide range of pre-determined options packages.
For those waiting on the configurator for the RC F, it looks like you'll have to wait a big longer, as Lexus hasn't launched a builder for its high-performance, 467-horsepower, $63,325 coupe. Stay tuned for that one.