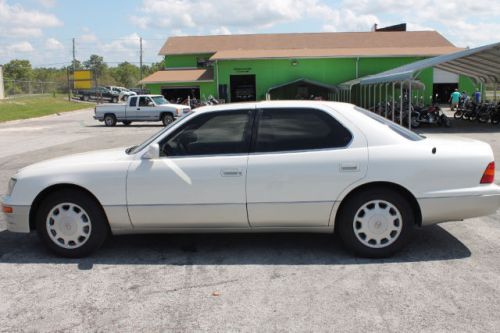 This is a MINT condition Lexus LS400 in the most desirable color, white diamond ! To find a LS400 in this condition is truly a rare find. It was driven and maintained by a mature individual, and has been well taken care of with regular full services and even comes equipped with 4 new Michelin tires! This Lexus LS400 is like brand new inside and out!!! Citrus Auto Center is your Best Choice for "Pre-Owned" Trucks and Cars. We are a "Family Owned & Operated" business with the owner in the store, and we're located in Lecanto on the beautiful "Sun-Coast of Central Florida". All vehicles are hand-picked & driven by the owner before being offered for sale. Best of all we price competitively and love to trade Cars, Trucks, & Motorcycles.

Following reports from last week that a refreshed Lexus CT 200h would arrive in dealers for the 2014 model year, we've gotten our first glimpse of what said refresh entails, and well, at first glance, it's not much. Lexus has fitted its familial spindle-style grille and a new set of headlamps to the hybridized hatchback.
Out back, the CT 200h has gotten a set of slightly slimmer taillights, while the F-Sport model shown here sports a revised rear bumper, with what looks like a subtle diffuser and some vertical vents. All told, the exterior refinements are nice, if not subtle, additions to the five-door hatchback.
It's unclear if anything has changed inside the CT 200h, although we'd expect a similarly light refreshening in line with what's been done outside. As for the hybrid powertrain, we wouldn't expect a wholesale change in that department - at least until the next-generation CT arrives around 2016.