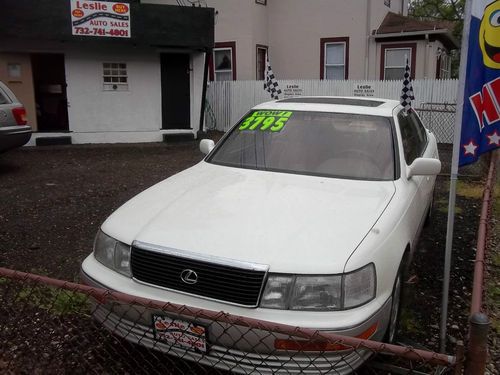 This here is a 1992 Lexus LS400. This car is a mint and came from the original owner. The car runs great and we just did over $2k in service such as timing belt, water pump, spark plugs, distributor car, rotor, ignition wires, belts, battery, oil change, collant flush etc etc. It was a major service and the car has plenty of life left in her. This was Lexus top of the line vehicle back in 1992 and was over $40k which was alot of money back then. Now is your chance to own a really sharp looking vehicle for alot less. The car is pretty clean inside and out with the exception of scratches here and there but nothing major. It is a used car so it isn't showroom condition. There is a tear on the passenger seat. The Kelly Blue Book on this vehicle right now is over $5k. So your getting a good deal no matter how you look at it because I put the reserve a little low. The car is sold as is with no warranty. This vehicle is also being sold locally so if someone wants it off my lot then I end the auction on here and retract any bids. If you are serious about buying the vehicle I suggest you call the dealership and put a hold on the vehicle. Our phone number is 732-741-4801. I don't expect this car to last so if you are intrerested give us a call. Thanks for looking. Leslie Auto Sales 150 Shrewsbury Ave Red Bank NJ 07701