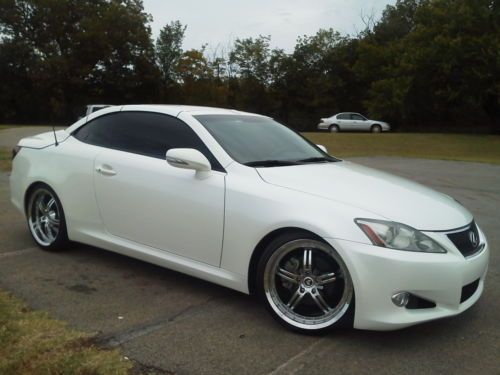 I purchased this car in October of 2012 with minor damage to the drivers side rear quarter panel. This was a X-Mas gift for my wife so I ordered all the needed parts directly through Lexus and had the car professionally repaired, inspected and title changed from salvage/insurance to Oklahoma Rebuilt. The miles are correct at around 19,000. This car is loaded with more options than I can operate. Heated/Cooled seats, navigation, back up camera, etc etc etc. It is the hard top convertible model and the top works perfect. We recently purchased a Z06 Corvette so the Lexus has to go. She put less than 1,000 miles on it over the past year.

I also added the following upgrades before delivering the car on X-Mas day:

The car is pearl white and super shiny. Recently detailed and waxed. Title is in my name and ready to transfer. We do not own junk and dont sell junk. My 100% feedback will reflect this. You can steal this car for a fraction of what they are selling for with super low miles (due to the branded title).

There are tons of options that you can research in relation to this model IS250c Lexus. We recently had Toyota service the car to make sure it had no problems before we put it up for sale. There also may be some factory warranty left since the miles are less than 20k but I think it depends on the manufactured date since the car is almost 3 years old. This is what Toyota found after servicing the car: The airbag light is on because the drivers side airbag thats located in the seat for side impacted was blown when I bought the car. For cost effectiveness I did not repair the airbag and just had the seat repaired to look new. There is another dash light on that is due to a sensor in the front area of the car that tells the headlights to follow the road when turning. I have no knowledge of how this works but its a fancy Lexus feature. There is no need to replace this sensor as the car has HID headlights that are so bright you can see anything in front of you without a doubt. They are the purple iced color maybe 10k factory from Lexus. Other than those 2 issues the car is perfect! Wheels and tires have less than 1 year on them and the car has been garaged since we purchased it.