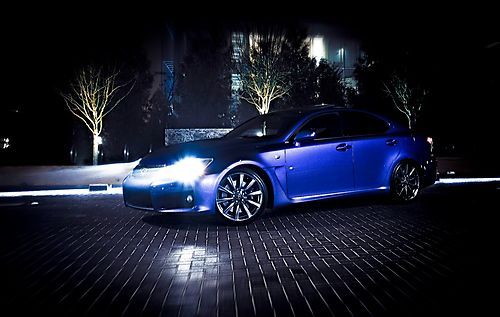 Condition: Certified pre-owned: To qualify for certified pre-owned status, vehicles must meet strict age, mileage, and inspection requirements established by their manufacturers. Certified pre-owned cars are often sold with warranty, financing and roadside assistance options similar to their new counterparts. See the seller's listing for full details. ...
2009 Lexus ISF
Ultra Sonic Blue exterior, Black leather Interior with blue stitching, fully loaded car. Has the Touch screen navigation with hands free phone and phone book.Upgraded Mark Levinson Surround Sound Stereo and back up camera,. Sunroof, powered and heated seats, 8 speed paddle shift transmission, selectable sport and snow driving modes. New tires, dark tinted windows, front bumper and roof vinyled with 3M UV protestant vinyl. Full Straight through exhaust which sounds absolutely awesome. Will Also come with stock exhaust packaged in trunk. I bought this car in January from my Local Lexus dealership and because it passed the inspections and checklist it was approved for a Lexus Certified Preowned 5 year 100,000.00 Mile warranty. I wash wax and detail this car on a weekly basis. Everything is in as new condition, you wont be disappointed. I would be happy for anyone that is interested to come take a look and drive the car. If not able to please feel free to have a independent mechanic look at the car. NO RESERVE & Happy Bidding.
***Vehicle is listed for sale locally so auction can be removed from ebay early.
I have a video of the exhaust that I can e-mail to interested parties.