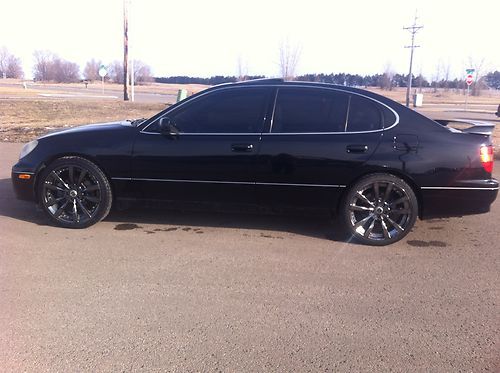 I have owned this car for 6 years and when I purchased it, the car had about 70,000 miles and looked and drove like brand new. The older couple owned it and garage kept every day after work and oil changed every 2500 miles. it has been the best and most reliable car I have ever ownered.
It runs and drives excellent and gets great gas mileage. If interested and not familiar with the lexus gs 400, do yourself a favor and do some homework on the internet and you will quickly see how reliable and exceptional quality they are. on a scale from 1-10 this car is about a 9 for overall condition and drivetrain. If you are a lexus enthusiest you will be very impressed with the condition and performance of this car. It is a
300 hp engine that gets 27-28mpg on highway. The wheels shown on the car will not be sold with car. I have provided picture of black powdercoated wheels that are now on car.

Lexus showed off its polarizing new NX at the 2014 Beijing Motor Show, trotting out both the turbocharged 200t model (Lexus' first production turbo) alongside the hybrid-powered 300h.
We still don't know a great deal about the turbocharged model, aside from the fact that the engine underhood is a 2.0-liter four-cylinder, although we're hoping to get details sooner rather than later. For reference, the 2.0-liter turbo in the BMW X1 pumps out 240 horsepower while the four-pot turbo in the Mercedes-Benz GLA250 turns out 208 horsepower, which leads us to think we should expect the Lexus to fall somewhere between these two figures.
If Lexus' naming strategy in the past rings true here, though, we can confidently say the 300h will use a 2.5-liter four-cylinder Atkinson cycle engine with an electric motor and lithium-ion battery, just like the Lexus ES300h and Toyota Avalon Hybrid. That should mean around 200 system horsepower and well over 30 miles per gallon, although it's probably too early to predict economy with any degree of certainty.