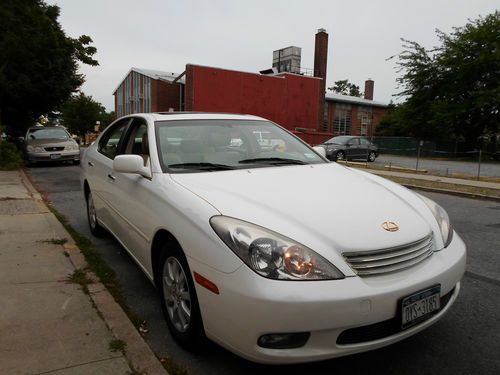 Condition: UsedA vehicle is considered used if it has been registered and issued a title. Used vehicles have had at least one previous owner. The condition of the exterior, interior and engine can vary depending on the vehicle's history. See the seller's listing for full details and description of any imperfections.Seller Notes:"Overall, the car is in excellent condition and runs perfect. Brake pads and rotors need to be replaced soon. VST and trac off light is on, and I am assuming it is because of bad o2 sensor. I am selling my car as is."

Up for sale is 2003 Lexus ES300 with factory installed Navigation.

I am the third owner. The car is well maintained and runs great. Car is very clean inside and out.
It currently has 98,972 miles on it. At the time of transfer, it will have little more than that (100~200 miles more)It is equipped with Mark Levinson sound system and a navigation.
I will provide the original car manual and 2 remote keys, and one valet key.
I will also include brand new spare o2 sensor, cabin air filter, and factory service manual.Please contact me for additional information.
Thank you.

Other than some missing badges and (hopefully) a not-yet-finished rear fascia, what you see here is an undisguised look at the long-awaited Lexus GS F high-performance sedan. Lexus' answer to the BMW M5 and Mercedes-Benz E63 AMG, the GS F has been spotted again.
Unlike our previous spy shots, though, this time around, the sporty Lexus has been caught testing on the Nürburgring, so our spy shooters have managed to get a look at the car from all angles. Building on the aggressive styling of the GS F-Sport, the GS F gets bigger air intakes and a lower chin spoiler up front. Like before, we see the signature stacked exhaust outlets, but they still seemed roughed into rear fascia, which gets an aero-aiding diffuser.
We still only have guesses as to what will be under the hood, but a 465-horsepower, 5.0-liter V8 sounds good to us. Expect to see the production GS F on the road by 2015.