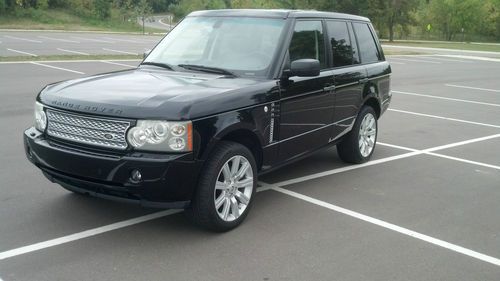 I have a well taken care of 06 Range Rover that currently has 121,810 miles on it. Over the last year or 20k miles I've kept all maintenance up to date including major things suck as front air struts, rear differential, to things as small as replacing weather stripping on rear window, replacing cup holders and changing of all fluids. This rover runs and drives as you would expect from such a high end vehicle with all functions working properly inside and out.
Most people looking as Range Rovers are familiar with the long list of options but for the few that are not I'll mention a few items.
The condition of the interior I would rate a 8.5 not perfect but in very good condition considering it's age. As mentioned above all functions work as they should including both cup holders (a know common problem) with rovers. The leather only shows very minor wear on the drivers seat (very minor). Back up camera was replaced and works great as does the touch screen sound/navigation system. The body I think is great condition and would rate it a 9 for it's age. Some normal road wear on the front bumper and maybe 2 small dings on the tail gate (about the size of a shirt button) not very noticeable. Tires/brakes I would put at 70% oil has been synthetic since new and was changed @ 120k. As you can see I put on a lot of miles mostly country driven and for this reason I keep my vehicles running at there best. For the condition I think the price is fair for both parties I have the title in hand and require a $500 deposit non-refundable so please ask your questions ahead of time.