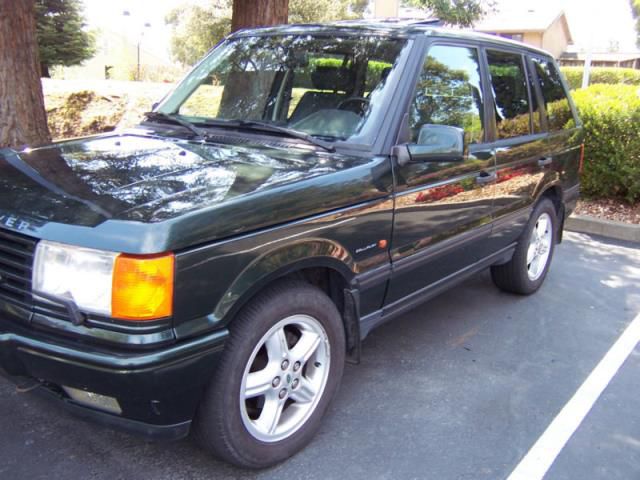 This is a used and in fair to good condition Range Rover Callaway number 136 out of 220 built. It drives nice, no leaks, transmission shifts smoothly. The suspension air bags were removed and replaced with springs/shocks earlier. The Wheels all around are in good condition, the brakes are 50% and tires in fair condition still have some meat on them. The vehicle has some issues as follows: - Front side mirrors clear coat is fading - Paint is fading around the sun roof - A/C works intermittently - After market Radio/CD unit - A/C module read-out not clear - Door panels cloth are loose. They had much of the black plastic painted body color and special dual exhaust system. The high performance Callaway engine with 240 bhp at 5,000 rpm and peak torque of 285 lb.-ft at 3,500 rpm improved the 4.6 HSE acceleration 0-60 mph from 9.7 sec to 8.6 sec. The Callaway 4.6 HSE . The "short block" of the engine is the same as other Land Rover 4.6 HSE models. Short-blocks used for the 4.6L Callaway engines were stamped with a 9.60:1 compression ratio marking from Land Rover. The increase of 0.25 points, up from the standard 4.6L compression ratio of 9.35:1 was achieved by a modification to the cylinder heads. The cylinder heads were also modified to improve the airflow into and out of the combustion chambers. The inlet manifold gasket front valley clamp has been changed to accommodate the heater hose positioning on the bottom front of the Callaway manifold. The ram pipe housing has been modified by shortening the ram pipe tube lengths. The intake runner lengths were tuned to increase both power and torque. The black plastic air inlet tube was replaced with a larger diameter fancy looking carbon fiber inlet tube to match the larger throttle bore in the plenum. The air cleaner box base was modified to increase the airflow. The Lucas GEMS ECU was calibrated to support the mechanical changes to the Callaway engine (the Callaway engine had the same basic FI as in 1998 and did not have the Bosch system that was on other 1999 HSEs).