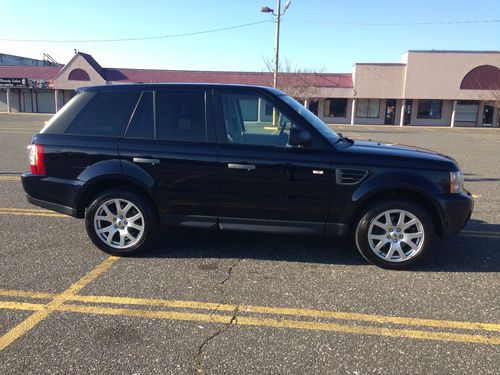 I am privately selling my 2009 Range Rover Sport HSE.  Buckinham Blue exterior with Tan interior.  This car has all options with the exclusion of the Luxury package.  The luxury package included the Cold Climate Package which this truck has and the woodgrain on the interior which I personally did not like.  This truck has the aluminum look vs. woodgrain.

The Cold Climate Package includes the front and rear heated seats, heated steerling wheel, heated windshield and heated washers on the headlamps.  I can tell you from personal experience that the heated wheel and windshield are one of the best options in these trucks.
It also has a moon roof, satellite radio, range rover branded heavy duty front, rear and spaceloader black and metal rubber mats which have been in the truck since I purchased it new.  I also have the tan matts that came with the truck and have never been used.
In addition I wanted to make sure that I was selling a truck that wouldn't need any additional work/cost to the new owner.  So in the past 2 months I put (4) new tires on the vehicle ($1,200), had it professionally detailed ($300), had a new heated windshield installed, I had it inspected by Range Rover over the summer and had the internal Hepa filters changed which I didnt even know existed in addition to an oil change and rear brakes so the truck is in excellent running condition.
I would say that the overall condition of this truck is good-very good.  Leaning towards very good condition. Let me outline the small imperfections. The right 2 rims have rash marks.  The front bumper has two small scuffs in the paint.  The rear bumper has a ding and the right rear passenger door has a VERY small ding.  On the interior the only thing I would say is that just above the Navigation unit the sun caused the black plastic to peel a little.
I have taken all of these things into consideration with my price and I am selling the truck below the standard asking price on ebay.
It is a very nice truck and the only reason I am selling it is because I recently relocated to NYC and do not have a need for 2 vehicles at this time.  I was considering keeping it for a very long time knowing that I have taken very good care of this truck and it has not had a single problem but it just doesnt make sense.  You are buying a single owner well taken care of vehicle.  I take my cars seriously as I have a family to protect and would only put them in the safest vehicle on the road.
I have the clean carfax for the truck and I am happy to take additional pictures at your request and within reason.
I cannot ship this vehicle so it is a pick up sale only.  You are welcome to view the vehicle as I have it in NYC at a secure indoor facility.