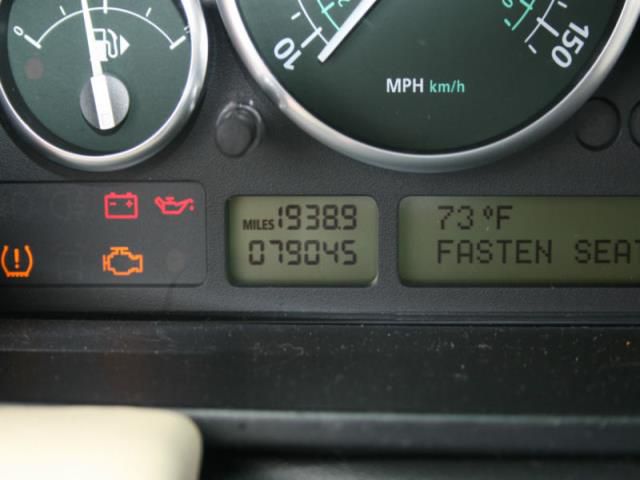 2006 Range Rover Clear Florida Title on hand. Complete file, with all service records, on hand and included with sale. All work has been done at The Land Rover Dealer... as documented by the complete service file. Only 79000 original miles... as documented by the service records. No accidents Original Paint Color is Buckingham Blue Sunroof Excellent Pirelli tires All 4 Brakes were serviced in November. A few minor paint defects as indicated in photos. The LH backup lamp, lense is missing. 3rd brake lamp Lense is missing. I think someone stole these parts from the parking lot. The tire pressure sensor needs replaced.. the light stays on. The interior is excellent. The RH rear seat bottom; the leather has shrunk causing the wrinkles you see. Needs repaired. The Truck has been stored under cover for most if its use. 4.2 Liter Supercharged V8 Engine 390 Horsepower @ 5750 RPM 410 lb/ft of Torque @ 3500 RPM All Wheel Drive 6-Speed Shiftable Automatic transmission ADAPTIVE CRUISE CONTROL (ADC) Locking/Limited Slip Differential Bluetooth Connection SIRIUS SATELLITE RADIO PKG One Master Key One Spare Key Operator's Manuals I have been driving this truck for the last two weeks while my truck was in for repairs. This truck drives excellent, with no shimmies or shakes.The wheel alignment is true. No pulling. Starts, runs, goes and stops as it should. No problems that I have found... it is a fine vehicle. I have this Truck advertised locally. I reserve the right to end the auction. Check my SELLERS feedback and buy with confidence.