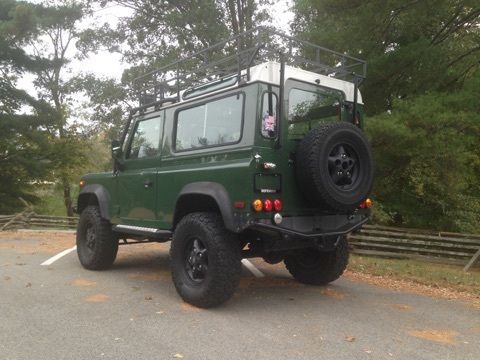 If you have any questions feel free to email: lula.carlye@tightmail.com .

1997 Land Rover NAS Defender 90. If you are looking for a last year NAS Defender that can be used
for what it was made for then this is your truck. This is not a garage queen that has only made trips to the mall
and Starbucks. The truck has 126k miles and mechanically runs very good, idles nice and no smoke on startup, has
nice power and shifts through all the gears nicely. Since this is the last year 1997 D90 it is an automatic with
factory air conditioner.
As you can see in the pictures there has been several modifications done to the D90 over the years. Below is a
list of all those items. The body and frame are in overall nice shape for a 20 year old defender that has been
used, it does have some rust body rust in several spots (mainly on the rear lower door/gate area). This would be a
pretty easy fix as it is rust bubbling in a few spots currently. The frame has no rust and I have taken several
underside pictures to show potential buyers. Heat blows hot and AC blows cold with good pressure. I just had a
new battery put in about a month ago as well.
I have listed the items below that need to be done on the truck to take it to the next level, I just drove as is
and decided not to mess with them. This is not a Lexus everyday turn key vehicle, it is a 20 year old truck that will always
need maintenance and little things to keep it running. Also if you are looking for a perfect garage queen please
keep looking, this one is defiantly not that, it's just a solid D90 that again has been used, light off road etc.
Modifications
Powder Coated alloy OEM wheels
285/75R16 Fierce Attitude M/T tires with excellent tread life
Kenwood Stereo with aux jack and Bluetooth
2 6x9 JBL speakers in rear, 2 6.5 speakers mounted in front seats
Plated bonnet and wing tops
Equipe rock sliders
Draken front winch bumper
Draken roof rack
Draken 4 link suspension
Smittybuilt XRC 8000lb winch
6 total Hella lights, 4 mounted on roof rack, 2 on front bumper
Tom Woods double carden front drive shaft
Tom Woods double carden rear drive shaft
Con's of D90
-Missing rear tail gate inside cover
-headliner was removed at some point so will need to be done or left only
-was rhino lined at some point on the interior but doesn't look great in the front driver passenger area.
-passenger role up window handle pops on and off
-I would change back the suspension to OEM or do a slee off road OME conversion, the suspension on it now is old
and pretty worn out.
-Brakes need to be gone through, it stops fine but there is a scraping noise front the rotors I assume, just didn't
get around to addressing.
- Odometer is digital and goes in and out, this was a common problem with NAS D90's
- E-brake light on dash goes off and on, no other lights on dash on.
- bubble rust areas on rear gate, right rear of D90.