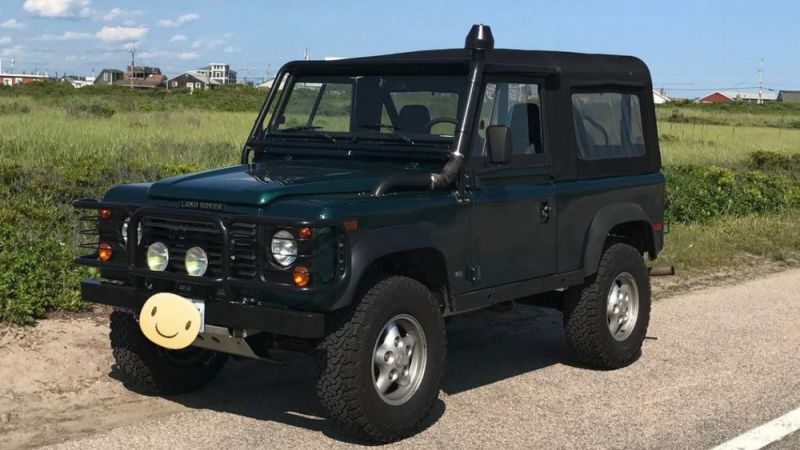 For more pictures email at: posse74@zoho.eu .

1997 NAS Land Rover Defender 90
Number 950
Complete Nut and Bolt Restoration
Offered for sale is a completely restored, extremely solid 1997 Land Rover Defender 90 NAS Convertible
finished in rare British Racing Green Metallic. This was the final import year for this vehicle and is one of only
438 NAS Defender 90s imported in British Racing Green Metallic in 1997. There were only 1499 convertibles imported
that year and this beauty is stamped #950. I purchased this D90 16 years ago and have loved it ever since.
This D90 just passed Rhode Island Vehicle Inspection with no issues or warnings (July 2017).
The Land Rover Defender 90 came with full-time four wheel drive and high-low range selection, a full roll cage and
factory air conditioning. Mechanically fantastic, this Defender is a pleasure to drive offering a rugged feel that
only the best 4X4 in the world can provide. The rebuilt 4.0L V8 starts effortlessly, idling and pulling strongly
and smoothly through each of the ZF automatic transmission’s gears. Compression is excellent across all cylinders
and the truck’s road manners are exactly what you’d expect from a meticulously restored , well-maintained
Defender.
With DOT regulations bringing the Defender 90’s three-year (`94, `95 and `97) North American run to an end, the
`97 model is the last and arguably best vintage of the iconic truck. Adding to the attraction is `97 is the only
year this model came with an automatic transmission. Consequently, the market on NAS Defender 90s has remained
exceptionally strong, making them one of the few modern-era production vehicles to actually be considered
investment grade.