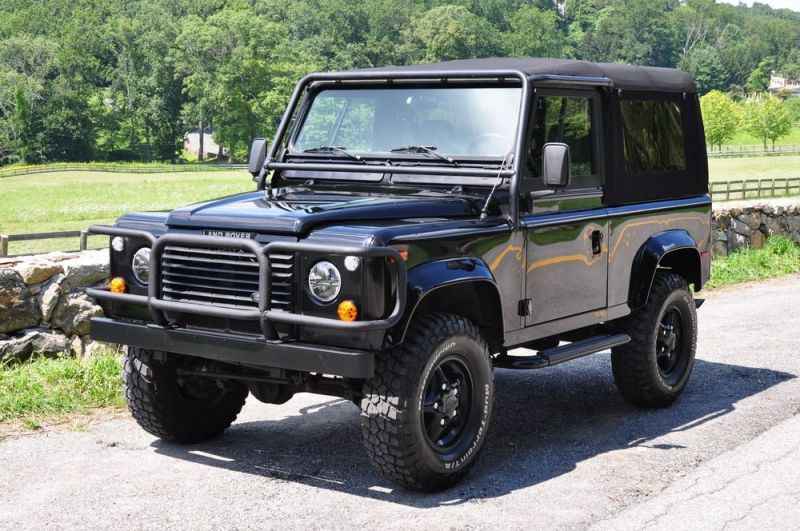 If you have any questions or would like to view the car in person please email me at: harryhsstjacques@clubporsche.com .

1997 LAND ROVER DEFENDER 90 SOFT TOP
CLEAN CARFAX HISTORY / VERY RARE DEFENDER / ALWAYS PAMPERED
You are viewing a very rare North American Specification (NAS) 1997 Land Rover Defender 90 Soft Top in Beluga
Black. This mint condition truck is one of only 1,499 Soft Tops made in 1997 & one of just 215 Beluga Black D90s
imported in 1997 by Land Rover North America.
This Defender is equipped with a 4.0L V-8 Engine, ZF Automatic Transmission and Optional Air Conditioning, which
blows cold and Full Time 4 Wheel Drive with High-Low Range
The Defender 90 is no longer available in the USA and has recently been discontinued overseas making it a true
collector’s item. This rare D90 has some upgrades however, it still maintains its classic style.
The interior is in original perfect condition and features an upgraded head unit w/ AUX & USB Inputs as well as a
CD Player (in case anyone actually still uses CDs).
FEATURES OF THIS DEFENDER 90:
• Custom painted to match wheels and fenders
• Top of the line Badger Coachworks Soft Top
• New Truck Lites LED Headlights
• New LED tail lights gives this classic an updated modern look, but can easily be replaced back to stock if
desired
• Just had full service including fluids replaced
, new filters, new throttle position sensor, intake sensor, oil change, new battery installed and more